The J Press 720S press will be showcased by Fujifilm at drupa 2016.

HANOVER PARK, Ill. — March 3, 2016 — Fujifilm Corp.'s President Shigehiro Nakajima has announced that Fujifilm will be using drupa 2016 as a platform to showcase how the J Press 720S is transforming print businesses today as a proven, high-quality digital production system, and why the press will continue to lead the market in B2 inkjet digital printing.

Launched as a technology concept at drupa 2008 as the J Press 720S, the press has benefited from a wide range of enhancements since its commercialization at drupa 2012. In particular, the improvement in press up-time, the addition of a new bar code system for variable data production and new modular SAMBA printheads added in 2014, together with the ability to handle heavier-duty carton board stock introduced in late 2015, ensure the current J Press 720S model is a proven, reliable and incredibly versatile production press.

Those printers who have invested in the J Press 720S have been able to produce ultra high-quality print that could not have been produced with either offset or other types of digital press, allowing them to successfully pioneer new business opportunities with higher profit margins. The J Press 720S is now transforming the operations of an increasing number of printers across the World, with the total number of installations now standing at 70.

Over the last decade, the application scope and capability of Fujifilm’s inkjet technologies have expanded substantially, making it possible to meet the exacting needs of commercial and package printing customers. The integration and evolution of printheads, inks and image optimization technologies is critical to delivering a reliable, high-quality inkjet production system. Fujifilm is able to optimise each of these three cutting-edge core technologies to optimise system performance to the maximum extent. Fujifilm will be showcasing these technologies at drupa 2016 under the brand name "Fujifilm Inkjet Technology."

The J Press 720S has benefited from the evolution of "Fujifilm Inkjet Technology." The latest generation of SAMBA printheads form the heart of the single-pass system used for high-performance and stable jetting. The wide-gamut VIVIDIA water-based pigment ink is applied with RAPIC anti-coagulation technologies to achieve ultra-sharp printed results on a wide range of printing papers. Other features include extended FM screening optimized for inkjet and an automatic "On-the-Fly" image compensation function that controls ink deposition inconsistencies. Endorsement of the performance and reliability of these technologies comes from the growing number of Fujifilm customers, and a number of suppliers, not least Heidelberg who have chosen these technologies to form the heart of their recently launched B1 industrial inkjet press.

The J Press 720S has built up a solid track record as a system for generating added value profit, with many users expanding their business on the basis of the world class quality and color consistency of the print produced. In addition, the J Press 720S has received ISO / DTS15311-1 and Toy Safety approval, and benefits from advanced environmental performance thanks to the deinkability of the inks (ISO standard being prepared). The full-speed variable printing capability has also made the system a powerful tool for collated printing, improving the efficiency of post-processing and speeding up job turnarounds. Many users are also setting themselves apart from their competitors by making maximum use of the wide color gamut of the VIVIDIA inks used within the J Press 720S, which in turn have helped accelerate the system’s market penetration. 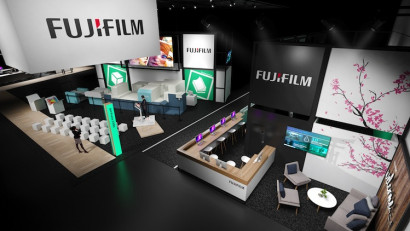 The Fujifilm stand as it will appear at drupa 2016.

At drupa 2016, Fujifilm will be showcasing in a true production environment, how the J Press 720S can deliver such competitive benefits, and Fujifilm is proud to announce the following enhancements to the press at the show:

Says Takuo Ito, director, Fujifilm Global Graphic Systems, notes, "Fujifilm has built the industry’s leading printhead, ink and image optimization technologies, which form the heart of our new 'Fujifilm Inkjet Technology’ brand, and we will continue to develop unique web and sheet-fed systems, such as the B1 industrial inkjet press jointly developed with Heidelberg, to expand the reach of these technologies and our portfolio of inkjet digital presses. We look forward to showcasing what the J Press 720S can achieve at drupa 2016, and invite printers to come and see how it can transform their businesses today to meet the changing needs of their customers."

About Fujifim Corp.
Fujifilm Corp. is one of the major operating companies of Fujifilm Holdings. Since its founding in 1934, the company has built up a wealth of advanced technologies in the field of photo imaging, and in line with its efforts to become a comprehensive healthcare company, Fujifilm is now applying these technologies to the prevention, diagnosis and treatment of diseases in the Medical and Life Science fields. Fujifilm is also expanding growth in the highly functional materials business, including flat panel display materials, and in the graphic systems and optical devices businesses.

About Fujifilm Graphic Systems
Fujifilm Graphic Systems is a stable, long term partner focussed on delivering high quality, technically advanced print solutions that help printers develop competitive advantage and grow their businesses. The company’s financial stability and unprecedented investment in R&D enable it to develop proprietary technologies for best-in-class printing. These include prepress and pressroom solutions for offset, wide-format and digital print, as well as workflow software for print production management. Fujifilm is committed to minimizing the environmental impact of its products and operations, proactively working to preserve the environment, and strives to educate printers about environmental best practice.