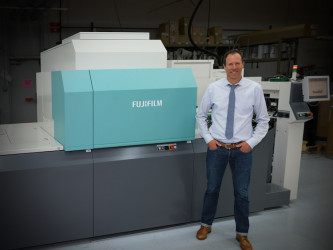 “The J Press 720S is in my opinion the very best digital solution,” says Brad Scull, owner, and second generation at Yorke Printe Shoppe. “I feel strongly about that because we checked them all out; our customers know we’re telling them the truth. And people like working with people they can trust.”

Prior to their purchase, Scull and his associates visited Fujifilm’s Americas Technology Center, and provided their own intricate print files to evaluate J Press 720S’s capabilities. Scull invited his entire sales team to be part of the purchase decision. And while looking at other options, he asked them, ‘what would make you most excited when talking to a customer about new technology?’ With a heavy emphasis on ‘what can it produce’ and ‘what can you sell,’ the overwhelming response was Fujifilm’s J Press 720S, and expectations were ‘very high’ as Yorke moved ahead and invested in the future.

Working closely with design firms across a variety of verticals, Yorke is heavily involved in branding, high-end identity, annual reports and books; which includes local clients as well as others reaching both Coasts. Adds Scull, “This is what we do, let’s continue to try to do it better than anyone else.”

“Creatives are used to designing around the inherent deficiencies of certain presses, due to a size or quality constraint,” said Scull. “We’re anxious to let them know of the capabilities we now have with the J Press 720S, with shorter runs, and variable data.”

Yorke has been keeping a close eye on digital technology for a long time, especially the high-end market since that’s their niche, with most of their clientele aspiring to achieve a high-end appearance on coated and uncoated stocks.

With a 29.5 inch x 20.9 inch sheet and an output of 2,700 sheets per hour, Fujifilm’s second generation sheetfed J Press 720S is an ideal solution for printers like Yorke because it offers the quality and robustness of an offset press, and the versatility to handle even the shortest of press runs. The configuration at Yorke is capable of printing 60 lb. text weight to 14 point board stocks; while other configurations are available to run heavier weight stocks, from 8 point to 24 point board stocks.

“The J Press 720S handles our short run work extremely well,” said Scull. “Our sales folks out in the marketplace will say, ‘look at this output in comparison to what else is out there,’ with reference to a lot of other technology being 15 – 20 years old.”

Scull discusses his thoughts on toner devices, and says, “Every toner device, whether it’s dry or liquid, piles – it sits on top of the sheet; on the J Press 720S it doesn’t. It looks as good or better than offset printing on uncoated stocks, delivering a look our clients love.”

With run lengths continuing to be shorter to meet client needs, color consistency was also key for Yorke, and one of the most defining features of the J Press 720S.

“When comparing the quality of color consistency - and even the dot itself - on the J Press 720S with several other options, at this point I feel like it’s head and shoulders above the rest,” adds Scull.

“Being able to print today, a week from now, or even a month from now, the output looks exactly the same. Our clients no longer require press checks on this type of work, so it’s a time-saver and creates efficiencies, said Scull.”

Scull does not enjoy the luxuries of a corner office lined with windows. His desk is in the middle of production, as he prefers to be where the action is, amongst all his colleagues. Yorke is truly a family affair. Scull’s wife pitches-in as well, working the reception desk, assisting in accounting, and providing an extra set of hands, along with their daughters, as needed in the fulfillment-area.

“I’ve had some great mentors, and my dad was a phenomenal role model,” says Scull. “We worked together for 20 years; he cared about people, and did the right things. Many of our employees have been with us over 20 years and we continue to invest in young people as well. We take very seriously what we do here, and I will not sacrifice people or relationships, and that applies to our customers, employees, and vendors.”