With an array of Xerox toner devices in its 8,000-sq.-ft. facility on the outskirts of Dallas, Frisco Independent School District Print, Mail and Sign Services had been pumping out high volumes of curriculum materials for years. The district is one of the fastest growing in Texas, with 73 schools, 8,000-plus staff members and nearly 66,000 students.

“Every year we grew in volume of impressions, and the district was continuing [to add] schools,” remarks Sherri Broderick, manager of Print, Mail and Sign Services. “We had to look at something that was going to give us a higher speed, and capabilities to do the volume that was going to come into play five years from now.”

That “something” turned out to be a pair of Xerox Baltoro HF cut-sheet inkjet presses, which the 17-employee in-plant installed at the end of December. The Baltoros replaced 10 Xerox Nuvera black-and-white printers and a Versant 3100, opening up a lot of floor space in the shop. Each press has been configured with a Xerox Tape Binder (XTB), a C.P. Bourg BDFx Document Finisher for stitching, folding, and trimming, and three feeder trays. 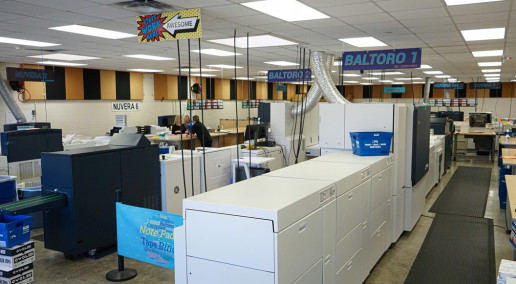 The new Baltoro HF inkjet presses replaced 11 other Xerox devices, opening up a lot of floor space in the shop.

“We have so many different types of stocks that we utilize,” explains Broderick. “We didn’t want to have to switch out paper trays all the time.”

With inkjet, the shop can now offer a new tier of less-expensive color printing, which Broderick terms “standard color.” This is perfect for curriculum materials. Customers who need premium color for annual reports, theater playbills, or flyers, will have their jobs printed on one of the in-plant’s two Xerox Iridesse printers.

“A lot of people are really moving towards color,” reports Broderick. “We felt like the teachers could use a pleasing color as opposed to a high-end color and save the district dollars.”

“It also speeds up our production on jobs,” she adds.

Printing up to 271 letter-size ipm duplex, the Baltoros nearly double the speed of the Nuveras they replaced. Plus, the in-plant can now send both color and black-and-white jobs to the Baltoros, instead of having to separate them and route them to different machines.

“It’s going on the same printer, so that, in turn, speeds up our production,” notes Jason Almand, manager of print services and operations. “Right now, my operators are probably doing about 200 jobs more a day just by combining the work back together. We’re able to spend our time on different things.” Sherri Broderick and Jason Almand stand with one of the new Xerox Baltoro inkjet presses.

He says the in-plant gets so much work each day that the Baltoros run continuously through both shifts, from 6 a.m. to 10 p.m. with maybe one break. And because these presses can cap the inkjet heads when not in use, nozzles don’t get clogged when starting back up after a pause, Almand says.

Before the pandemic, the shop processed more than 2,500 print jobs every day — an average of 10 million impressions per month. Though volumes have dropped to about 1,400 jobs a day and 5.5 million impressions per month due to the pandemic, they are still substantial. The inkjet presses are allowing the in-plant to print that work faster, more efficiently, and for a lower cost.

“The higher the volume, the lower your impression cost becomes,” Almand says. 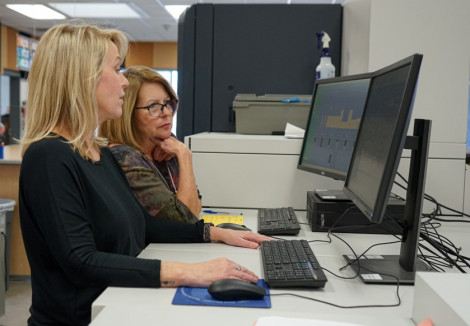 The shop also had no problems using its existing 20-lb./75 gsm copier paper and 90-lb. index card stock on the Baltoros.

“It’s not been an issue,” affirms Broderick.

The decision to move to inkjet was several years in the making, she says. After looking into inkjet in 2019, she didn’t feel ready to make the change. But in late 2021, with equipment leases six months from ending, Xerox made a strong push to get the shop to upgrade to inkjet, Broderick says, adding incentives to get it done by Dec. 31, 2021.

“It was really a whirlwind install,” she says. But Xerox brought its “A Team,” she adds, so installation went smoothly. The shop had to install two humidifiers and ducts, and also upgrade its electrical system.

Despite the in-plant’s extensive printing capabilities and high volumes, Broderick laments that a lot of printing is still being done by teachers on their schools’ copiers. Her goal is to bring more of that work into the in-plant.

“Those campus impressions are at a higher rate,” she points out. With the Baltoros printing color at just $0.0041 per impression, the cost savings provided by the in-plant are tremendous.

The Baltoros aren’t the only inkjet additions to the shop. The in-plant recently added a Vanguard UV flatbed printer to its sign center, along with a Kongsberg precision cutter. The shop has used the equipment to produce cardboard packaging for internal use, athletic record boards, and general signage, as well as large custom-designed Christmas tree cut-outs for a senior luncheon.

“Everything seems to be going quite well,” Broderick says.