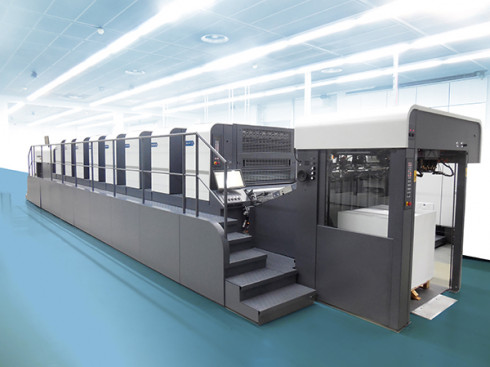 Canada’s first Evolution R708P, with LED technology will be delivered this Spring.

OFFENBACH AM MAIN, Germany - February 22, 2018 - It wasn't long ago Friesens earmarked a milestone in its history when it added the World's largest perfecting press at 73˝ wide to its fleet of offset presses. Friesens has seen many production improvements of over 300% from the XXL and will continue its investment in cutting edge technology for 2018 with Canada's most automated 41˝ press. The all-new Evolution from Manroland Sheetfed begins installation in the early Spring at Friesens’ Altona, Manitoba, facility.

Founded in 1907, Friesens has garnered a reputation as the premier book facility in North America; however, their abilities are not limited to just books. One of their more recent divisions, think4D, which specializes in Tactile Packaging is a growing sector of their business and suitably compliments their myriad of book production and packaging.

To keep up with the growing trends of Friesens Corp.’s esteemed clients, they have turned to Manroland Sheetfed to deliver a high-speed perfecting press with the industry's fastest job turn-over capabilities, the Evolution. Equipped with SAPL, autonomous and simultaneous make-ready feature, Friesens can now exchange plates in under one minute while simultaneously washing up the press. This is a vital compliment in the quick changeover feature pioneered by Manroland Sheetfed. The real ability of the press lies in the color control science exclusive to Manroland Sheetfed with the InlineColorPilot system.

"We were first introduced to the InlineColorPilot system with the XXL, what impressed us most was the ability to calibrate the system including print register without needing to draw a sheet from the delivery," said Byron Loeppky, VP and general manager for Friesens. "This saves us time and keeps press stability intact reducing the overall makeready waste and time."

The single key technology difference on the new press for Friesens is the addition of the optional LED UV upgrade. This will be their first entry into the UV market for an offset press. Up until now, Friesens has been a 100% conventional ink print shop in their Sheetfed Division.

It was time we made the transition into LED UV," noted Steve Voth, pressroom manager, Friesens. "Although most of our work is produced on uncoated stock, the necessity for quicker job-turnaround, running more unique papers that dry slowly, and obtaining some of the requested effects you can achieve when running LED UV."

The Evolution is awarded as the most ergonomic press design to date of any modern platform. With the IntegrationPilotPlus operating system and over a hundred new design changes from the previous Manroland 41˝ press models, Friesens yet again makes a bold statement regarding the health of the sheetfed offset print market.