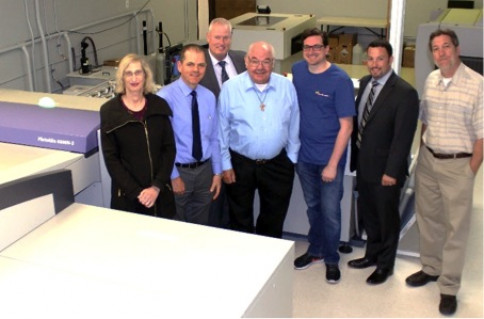 HAYWARD, Calif. — June 22, 2017 — “It looks like just a bunch of beige boxes, but what a miracle machine it is inside!” So said Dick Folger, president of FolgerGraphics. (FG) When he started printing back in 1959 his platemaker consisted of a glass plate, some foam rubber, a plywood board and two C-clamps. He would place a film mask over an unexposed plate, clamp it under the glass and set it out in the sunlight for a few minutes. The exposed plate was then hand developed.

The Fujifilm thermal CtP solution with auto plate handling now does Dick Folger's platemaking automatically and at a speed of 23 plates per hour.

On opening day for the new machine, Fujifilm reps came to join FG management for the maiden run.