Here’s the next installment in our continuing series of republished “Otto’s Night Watch” columns written by Otto Boutin, which appeared monthly several decades ago in Printing Impressions. Although perhaps penned 50 or so years ago, I found it remarkable that the jabs he took in his short story about a print broker "chiseling the starving printers" on price and the overzealous salesmen "eager to unload all kinds of equipment on credit" to a startup printing operation that hadn't been vetted are refrains that one might still hear today — just as they were concerns facing the industry decades ago. And, of course, the plot line about the corrupt politician helping to funnel government work to a deceptive business operation still rings true. The era when this was written may have been different, but the age-old problems of greed and deception remain.

In this jet age it’s the far-away place that glitters with glamor. It’s a matter of prestige to get suavely clipped in a gambling joint in San Juan or to stick your fingers into that gluey goo-goo at Waikiki. And it’s nice to be able to talk about the interesting people you’ve met in Rio or Bombay, like that kindergarten teacher from Council Bluffs or the sanitation engineer from Hoboken.

But there’s a lot to be seen right here at home. Take the state of Indiana, for instance. It’s neither glamorous nor spectacular, but there’s a comfortable coziness in the very names of cities like Kokomo and Terre Haute, and a muted reminder of Indian lore in rivers like Kankakee and Tippecanoe.

The rolling hills of Indiana have cradled some of the great men of American journalism, while the lovely banks of the Wabash have inspired some of our most beautiful songs, including Star Dust. The natives of Indiana, as a rule, become attached to their land. They form the backbone of the nation.

Therefore, to get the feeling of the real America, I like to wander down the Hoosier state, from the steel and vice of the north, past the blushing nudism of Roselawn, down to the towns where farmers gather on wooden benches on Saturday night while their wives do the weekly shopping. There are still a few movie houses where kids whoop it up with popcorn and bubble gum during Sunday matinees, glad to get away from the confinement of television in the parental living room.

Last summer, as I was meandering south, I poked my nose into a print shop in central Indiana. It wasn’t much of a printing plant, only 20 by 30, made of gray concrete blocks. But its name, Bonanza Printing Co., intrigued an old prospector like me.

The only person in the shop was a young man with a cute mustache. He was sitting at a desk, poking into a typewriter.

“Sorry,” I said. “I thought this was a print shop. I happen to be looking for a few days of work.”

“You’ll have to speak louder, sir. I’m hard of hearing, but I can run almost any kind of equipment...”

I wanted to explain that my deafness was only temporary, depending on the humidity. Foggy weather always clogged up my sinus, or something. Otherwise I could hear pretty good.

But the fine young man was shaking my hand. “It’s all right, he was hollering loud enough to disturb the hogs across the highway. “You may be just the man we’re looking for. I believe in hiring handicapped people. They don’t goof around.”

And he took me to the shop behind the partition. The equipment consisted of a worm-eaten cabinet with fonts of Cheltenham, Gallia, and Comstock. The 10x15 press might have been the masterpiece of George Phineas Gordon back in 1872. 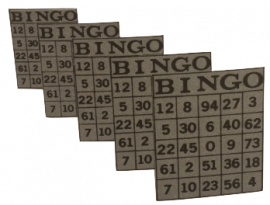 The phone rang and Mr. Boss excused himself. He came back with an order he had just jotted down. It called for 250 bingo tickets to be delivered the following week.

Worriedly I gave the press a trial run, hoping it wouldn’t collapse. Then I picked up the composing stick and wondered how I was going to support the whole shebang with 250 bingo tickets.

But business was picking up. Mr. Boss kept talking on the phone, taking in all kinds of orders. Now and then I’d hear something about 10,000 circulars, 50,000 ballots, and 5,000 copies of a political newspaper. I was getting worried. The guy might be nuts.

He was all smiles, however, rather cute in his mustache, and he didn’t complain if it took me a half day to run off 250 bingo tickets. For the rest of the week he kept giving me calling cards and things like that, just enough to pay my salary.

In his station wagon, meanwhile, he was dragging in bundles from all kinds of places. To every bundle he would attach the gold and red label of the Bonanza Printing Co. and send it right out again. Within a month he had to hire a good-looking blonde to help him with the billing, labeling, and bookkeeping.

Now and then she’d go out for a ride with a politician who seemed to be a very good customer.

One day Mr. Boss gave me a quart of brandy.

“We’re going to have some inspectors here day after tomorrow,” he said in the loud voice he always used on me. “Don’t talk to anybody. Just act deaf and dumb.”

“O.K., sir,” I replied, using the finger language I had learned in the composing room of the Chicago Tribune.

Next day I helped him unload three offset duplicators he had borrowed somewhere. I plugged them in, leveled them off, and got them rolling, using the aluminum plates he had brought along.

When the inspectors came there were three temporary employees in the shop, hired just for that day. They didn’t know one end of a press from another. All they did was flick the switch and try to stack the paper. I did all the rest. After the inspection, Mr. Boss gave them 10 dollars and told them thanks.

There was a tinkling of glasses in the office as Mr. Boss and Mr. Politician were laughing. Even the blonde was giggling.

“We made quite an impression, didn’t we?” said Mr. Boss. “It looked like a real busy shop. I’ll have to return those duplicators tomorrow. They’re not even bolted down.”

I was getting rather disgusted with my new job. I knew that Mr. Boss was a broker and that the shop was merely a front. He was bidding on all kinds of political work and farming it out for the lowest prices he could get.

One day there was a hassle in the office.

“You can’t bluff them forever!” Mr. Politician said. “You’ve got to get some real equipment in here. Besides, we could bid on a lot more work...”

“Keep your voice down,” said Mr. Boss. “D’you think I enjoy riding all over Indiana, Illinois, and Kentucky, chiseling the starving printers? Sure I’d like to have equipment right here. But I’m not going to risk MY money.”

And so Mr. Boss packed his journals, ledgers, invoices, and the blonde secretary into this station wagon and went to the big city to get a loan. I overheard that he expected at least a half million, considering the tremendous volume of his rapidly growing enterprise.

But I had an old-fashioned feeling that the government was not going to give a young whippersnapper a half million dollars, even if he had a cute mustache. And I was right. It took a lot of overnight trips to the metropolis before he finally got his loan, a very disappointing loan, nowhere near a half million. He had to settle for a mere $225,000, which, of course, is peanuts.

The shop rally began humming with salesmen, eager to unload all kinds of equipment on credit. They were selling everything — letterpress, offset, hot type, cold type, film type, and beautiful yellow ribbons of tape. I felt rather silly, running my little bingo tickets in a corner. And new employees were being hired to run the equipment, at double my salary. One day my press was sent to a museum.

“You’re still one of the team, Otto,” Mr. Boss assured me. “We’ve promoted you to superintendent of maintenance.” And he handed me a brand new broom.

“Sorry, sir,” I said. “It’s getting cold in Indiana. I’m hankering to follow the birds down south.”

He didn’t seem unhappy about my leaving.

“In that case I’ll pay your wages right now,” he said. And from the filing cabinet he gave me a full quart of brandy to remember him by.