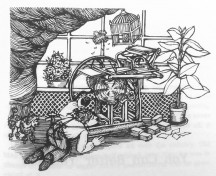 Here’s the next installment in our continuing series of republished “Otto’s Night Watch” columns by Otto Boutin, which appeared monthly several years ago in Printing Impressions. Written in Otto Boutin’s typical humorous style, it does illustrate how many things in life are not what they may appear to be, nor play out as expected — whether it's a "squeaky" Gordon press in need of oil or the excitement surrounding the potential of a budding romance. Enjoy!

Marvin was one of the most kind-hearted men I’ve ever known. When he caught a butterfly he always let it go, believing that life in any form was extremely precious.

He was one of those lonely printers who wander about the country, living simply, becoming more and more withdrawn from society because he was having trouble with his ears. He could hear some voices, but not others; high sounds but not low ones. Nevertheless, he was a good printer who could have had a steady job anywhere, if he had so desired.

One day he sat in a park bench in Omaha, wondering whether to hitch-hike east to make some money, or go farther west, to Santa Barbara, where the swimming is wonderful in October. Still undecided, he picked up a copy of the World-Herald, discarded by someone, and saw a want-ad asking for a printer. Obeying the impulse, he went down the hill to Thirteenth Street and stopped at the door of the print shop.

He was astonished to see such lovely pink drapes in the window, As he opened the door, his poor ears were treated to the sound of Oriental chimes, which he plinked do-mi-sol-do, do-sol, do-sol. He would have turned back, feeling he had stumbled into the wrong place, had it not been for the clanking of a Gordon press. A woman was running it.

Shutting off the machine, she turned to face Marvin. Despite her masculine attire — slacks, shirt and a cap — Marvin could see that she was quite a woman, all the way down. A few blonde curls crept from under her cap across her ink-stained forehead.

“You’re a printer?” she asked, hopefully.

Marvin nodded. He was a good lip reader and those were beautiful lips to read.

“Oh,” she seemed disappointed. Then she continued. “My husband died, almost a year ago. And I’ve been trying to keep the business going. It’s tough.”

Marvin studied the Miehle Vertical, standing clean and idle. He winced as he saw all those undistributed forms on the slanted tops of the type cabinets and he didn’t like those flower pots around the presses. He felt a sudden urge to go to California, but he felt sorry for this poor widow, stuck with a print shop. A horrible fate for any woman.

“I’m so glad,” she said, taking off her cap and letting her blonde hair fall to her shoulders. “I’m pretty good at setting type,” she said modestly, “but when it comes to presses, I get scared.”

“I can run any press,” said Marvin. “Real good. Want me to start now?”

She looked at the clock, “It’s almost four already. We’ll let it go for tomorrow. Have a cup of coffee?”

From the apartment in back of the shop she brought an electric coffee pot and a tray of cookies. They stood at the make-up table, eating and talking, for more than an hour. Now and then Marvin gave a cookie to a white poodle who had taken a liking to him.

The Lady Boss nodded in satisfaction. “A dog is a good judge of character,” she said.

Marvin was on the job 15 minutes early the next morning. The Lady Boss wore a simple yellow dress, but she filled it like an Italian movie star. She needed no nylons to enhance the beauty of her smoothly shaven legs.

“You’re early,” she said to Marvin. “I’m just having breakfast. Care to join me?”

“Another cup of coffee won’t hurt you.”

He followed her to the kitchen. It was a neat, cozy little apartment she had back there, a harbor of femininity where the morning sun filtered through ruffled white curtains and where the fragrance of apple pie made a man wish he had a home of his own.

In one brief moment of introspection, Marvin regretted all the years he spent in aimless wandering. In the woman’s large brown eyes he saw the dawn of a new life.

“Show me what you want done,” he said, rising from the table. “I can work better than any two men.”

She led the way into the shop with a spring in her step, as if she, too, saw the hope of a better future.

“Start with these dance tickets,” she said. “Print a thousand of them. And then these statements...”

While he studied the job tickets, she added. “I’ll be back in a couple of hours. I have to see a few customers. I’ve been neglecting them.”

While locking the form in the Gordon and spreading the ink on the rollers, Marvin’s mind was on the Lady Boss all the time. Strong with new found power, he would show her what a great printer he really could be.

He had run off almost a hundred tickets when he heard a squeak. He threw in the safety lever and listened. Squeak. Sounded like a bearing. Women never remember that a machine needs oils. He shut off the press and looked for an oil can, which he finally found behind a pot of geraniums. He gave the old Gordon a real good oil job. 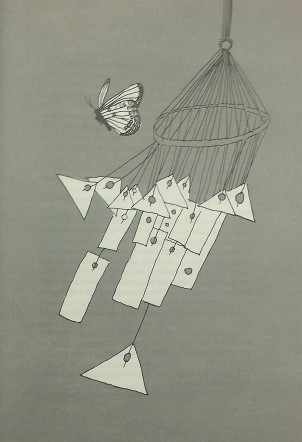 Confidently he threw the switch, increasing the speed to make up for lost time.

He slowed down. Squeak. Squeak.

He shut off the press again, looked around for a wire, and began digging the dirt out of the oil holes. That poor Lady Boss never thought of cleaning such important things; she was too busy cleaning windows.

An hour was gone and he still had only 150 cards printed, but with a bit of speed he’d get them all out before she came back.

He stopped again, mad at himself for becoming so filthy from crawling around that darn press. He knew that he had ink on his cheeks and oil in his hair, but he had no time to wash. He oiled everything once more and desperately started the press again.

On his hands and knees he stared into the mechanism of the slowly idling press. Only 200 dance tickets in two hours. For the best boss in the world.

He saw it. Through a gap in the slowly moving cams he saw it. It was in a cage against the wall, next to the rubber plant.

Marvin really did love all living creatures, but as he was kneeling on the floor, frustrated, dirty, oily, ink-stained and way behind schedule, his hand instinctively reached for a mallet.

And when the canary went squeak, squeak, in obvious derision, Marvin let the mallet fly.

He didn’t hurt the bird. He only put a dent in the cage. But quite a few yellow feathers were flying around when the Lady Boss came running across the shop.

“Poor Birdie Boy!” she was shrieking. “Are you hurt? By that horrible brute?”

And he walked out into the street, sadly reflecting that even the noblest aspirations of man can be loused up by a little canary.