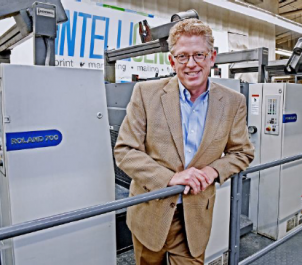 According to an article in LancasterOnline.com, a sheetfed printing press caught fire and was damaged extensively at the former Intelligencer Printing plant at 330 Eden Rd. in Lancaster, Pa., on Sunday morning, forcing an evacuation of the facility as smoke billowed from the roof. No injuries were reported and the blaze was said to be extinguished in about 45 minutes.

Still Undetermined if Printing Press Can Be Saved

The smoke has already cleared from the building and the water is in the process of being removed, Baker noted later that same day to the website, which is affiliated with the LNP daily newspaper. He added that it was still undetermined whether or not the press could be repaired or would need to be replaced.

Baker is a 32-year Intelligencer Printing veteran who served there in the role of president since October 2016, before being named president of the new organization that acquired the printing operation.

M&A Rollup of One of Oldest U.S. Commercial Printers

One of the oldest commercial printing companies in America, Intelligencer Printing was founded in 1794 with the launch of The Lancaster Journal. The printing operation was sold in early April by LNP Media Group/Steinman Enterprises as part of a three-company M&A rollup that also combined the operations of Pemcor Printing of Landisville, Pa., with AE Litho of Beverly, N.J., with Intelligencer to create a new company called Intellicor Communications. Principals of the nearly $50 million in sales, 200-employee Intellicor organization include Michael Hurly and Jeff Bozzi.

To read more complete coverage and the full story that I wrote back in April when Intelligencer Printing was first acquired, click here.