Is there a business opportunity for the commercial printing segment in industrial printing applications? The most reliable answer at this point is a definite maybe. But, a market that’s been described by many pundits as “ready to pop for a long time” is definitely worth exploring.

Even cinder blocks can become an art medium, as shown, when a Ricoh Pro T7210 UV flatbed printer is used as the creative instrument.

When printing stops being printing for its own sake, it’s time to recognize it for what it actually is: industrial printing.

Friends of traditional printing like to say that print in the form of mail, brochures, publications, signage, etc., is everywhere. The fact is, however, that these products haven’t achieved anything like the ubiquity that sets industrial printing apart.

This is because virtually every manufactured good bears some sort of identifying or functional mark deposited there by a printing process taking place as one link in the chain of a much larger manufacturing sequence. These goods, not traditional products, are what truly can be said to be everywhere, forming the vast and expanding parallel universe of print that industrial printing has become.

In more down-to-earth terms, it’s a market that Mark Hanley, president of I.T. Strategies, estimates will be worth more than $32 billion in the U.S. by 2020. Vendors selling technology into the market view industrial printing as one of their primary opportunities.

This is why Brian Dollard, director of strategic planning and business development for Ricoh USA’s newly formed Commercial & Industrial Printing Business Group, says the inkjet systems Ricoh is developing for the industrial market represent “our bet on the future of this industry.”

First Off: What Is it?

Is there corresponding opportunity for the commercial printing segment in industrial printing applications? The most reliable answer at this point is a definite maybe. The first step toward breaking in is getting an accurate picture of the nature and attributes of industrial printing. 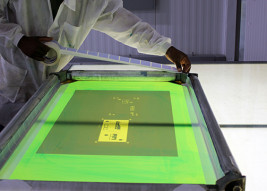 At ECI Screeprint, a specialized printer that is located in Watertown, Conn., a screen is prepped for production on-press.

Edward F. Cook Jr., who does it for a living, says the best description for it is “printing as a methodology for manufacturing:” an activity that takes place either at specialized printing businesses like his, ECI Screenprint Inc. in Watertown, Conn., or on product manufacturing lines integrated with printing stations. Any company operating as an OEM (original equipment manufacturer) performs some type of industrial printing, Cook observes.

ECI Screenprint uses the process for which it’s named to produce membrane switches, rubber keypads, touchscreens, thin film medical sensors and other items that are assembled with related components into finished products. Printed circuit placement, laser cutting and digital printing may also be parts of the manufacturing workflow. 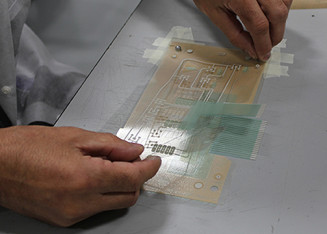 It’s a mistake, says Hanley, to view industrial printing “purely through the prism of printing” as most people understand it. In the industrial world, he contends, “very few people think print is important” except as a means to a manufacturing end.

Unlike in traditional production, the printing isn’t the dominant technique, but one of a number of steps in a complex sequence of events. In industrial printing, “print adds value within a bigger process,” says Tom Molamphy, business development manager of the Industrial Inkjet Ink Div. at Agfa Graphics.

‘Anything that Isn’t Paper’

Another way to delineate industrial printing is by application. Broadly speaking, points out Josh Hope, senior manager of 3D Printing & Engineering Projects, Mimaki USA, industrial printing is putting ink onto “anything that isn’t paper,” but often in small batches that don’t scale up to true “industrial” quantities. He advises printers to look at the printable objects they are outsourcing for clues to the kinds of industrial printing they might be able to do in-house.

The “Mimaki Microfactory” concept is a solution for custom-printing guitar effect pedals (pictured here) and many other kinds of industrial applications.

At Fujifilm Dimatix, says Timothy Rosario, senior project manager, Fujifilm Inkjet Technology, “we define ‘industrial printing’ by the various substrates we are printing on, including sandpaper, waterproof seam tape, cement board, drywall, house wrap and insulation.” This gives a sense of the role industrial printing can play in non-traditional markets such as homebuilding, where Fujifilm Dimatix has introduced an LED-UV solution, the StarFire SG1024 industrial inkjet printing system, for printing construction materials.

An Abundance of Applications

Categories like these are clear enough, but agreement about what is and isn’t “industrial printing” is far from universal. For example, contends Hanley, the definition has been “somewhat hijacked” by producers of functional printing: the body of techniques for creating printed surfaces that do scientific things such as lighting up, conducting electricity or acting as antennas.

According to Hanley, “industrial printing” should apply only to marks or decorations on items we can see. “Molecular epitaxy [a nanotechnology for forming semiconductor materials] isn’t printing,” he says.

There’s less disagreement about what stands as the predominant process for industrial printing. Digital inkjet with UV inks is seen as the technology with the greatest potential for growth, although, as Cook points out, screen printing, pad printing, gravure, and even offset lithography, have well-established industrial applications.

“Ricoh bet heavily on inkjet a long time ago,” according to Dollard, who notes that the company makes inkjet heads for its own systems, as well as for the OEM market. He says Ricoh’s R&D objective for industrial inkjet is to “eliminate inhibitors to printing on different things:” even things as unlikely as cinder blocks, which Ricoh and partners decorated as part of an exhibit at the 2017 SGIA Expo last October.

“If it’s truly printing, it’s nearly all inkjet,” Hanley says, who in a 2013 white paper for I.T. Strategies, stated that industrial print markets “will be bigger, more valuable and more defensible for digital than all the digital document printing markets put together ever were.” Inkjet, he wrote, has developed the speed, substrate friendliness and variable-data flexibility needed to replace analog processes in key applications such as ceramic tile printing.

Wide-format inkjet systems create the main area of overlap between industrial and commercial printing. Not every wide-format device is suitable for industrial use, and the ones that are may not have what it takes for the kind of high-volume production that OEMs do. But, if opportunity in industrial printing for commercial print providers exists, it probably is in types of wide-format equipment that they have adopted for other purposes.

These acrylic pieces were decorated with a Mimaki
LED-UV printer and finished using a Trotec laser cutter.

Molamphy points out that while there are industrial applications for Agfa devices such as the Jeti Tauro hybrid LED-UV inkjet printer, wide-format equipment generally isn’t geared for the high-speed, single-pass performance that industrial printing on an industrial scale requires. As a supplier of industrial inks, Agfa is working with printhead manufacturers and system developers to push wide-format inkjet further in this direction.

Fujifilm is also emphasizing the high end of the performance range, according to Rosario. “We are focused on single-pass applications where we can use our technology to print while not impeding the speed and throughput of the manufacturing lines,” he says. “In some cases these could be as fast as 2,000 linear feet per minute.”

Where’s the Door Marked ‘In’?

That is a lot faster than most printers (unless they are web offset newspaper printers) are accustomed to operating. As Hanley notes, there is also the fact that most industrial printing is engineered to take place in factories, not printing plants. So, the break-in opportunities for commercial print service providers have limits.

The most realistic way for commercial printers to approach industrial printing may be to think of it as a boutique service. This would appear to be what Mimaki has in mind with its “Mimaki Microfactory” concept, which combines the company’s printers, cutters and inks with complementary technologies from other providers in “pop-up” facilities for decorating and personalizing finished consumer goods.

A microfactory with a web portal at the front end and a fulfillment function at the back end can be set up for less than $100,000, according to Hope. A less expensive route is to begin with a $20,000 desktop or “benchtop” flatbed UV inkjet system and add more units as industrial volume increases. He says that anything being sent out for personalization is work that can be recaptured for profit in this way.

Commercial printers that have invested in wide-format inkjet equipment that can be repurposed for industrial printing can capitalize on the opportunity, Dollard says, by offering it as a service to existing customers. But, they must also accept the “one-off” nature of the work and its other differences from the kinds of projects they are used to handling.

Preparing for industrial printing means learning about substrates, adhesives and compliance with technical specifications from bodies such as Underwriters Laboratories, Cook advises, adding that selling industrial printing is a different discipline than selling printing for branded products. He also encourages investigating screen printing, which he affectionately describes as “a black magic art technology with a lot of science behind it.”

Cook, who also is chairman of the board of directors of the Specialty Graphic Imaging Association (SGIA), estimates that about 400 members of the group perform industrial printing. Representatives of many of these companies will attend SGIA’s upcoming Functional Printing, Process and Products (FP3) Conference, a forum for industrial printing and printed electronics. Cook says industrial printing has always been “a huge part” of the agenda at the SGIA Expo and will continue to be prominent at PRINTING United, the SGIA-NAPCO Media event that will succeed SGIA Expo in 2019.

Research will pay off for those intrigued by the possibilities of industrial printing. So will patience. Molamphy advises that although Agfa sees industrial printing as a market that has been “ready to pop for a long time,” no market ever emerges as rapidly as those who want to leverage it would like it to.

On the other hand, consider printing on ceramic tile, a niche that once belonged entirely to rotary screen printing, but now has been “reimagined” as an application for digital printing. In just two or three years, Molamphy says, digital inkjet “took over the market” for tile printing as people saw how productive and efficient it could be.