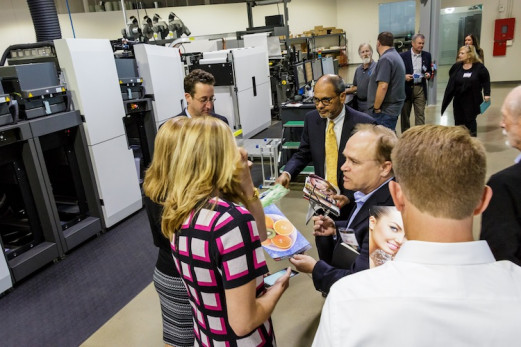 RAPID CITY, S.D. — The Lakota Sioux consider the Black Hills of South Dakota a sacred area. From a distance, the landscape appears black, due to a thick growth of pine trees; and on a fall day, maple trees speckle the hills with gold. Mother Nature certainly succeeded with this design.

The Black Hills provided a dramatic backdrop to the Design Thinking Summit, which was hosted at Fenske Media, located here, and sponsored by Kodak. About 30 customers and prospects from across the nation descended upon Fenske’s nearly 100,000-sq.-ft. campus to spend a day learning how “design thinking” methodology can be used to solve complex problems for customers, and specifically how printing fits into the mix.

As Dave Fenske, who operates the firm along with his three brothers, put it, “Our goal in creating the Design Thinking Summit was to focus on a user-centered perspective that would enable our attendees to create products and services that will delight and empower their customers.”

Headlining the event was Dave Hoffer, executive experience design director at McKinsey & Co., and an advisor to some of the most successful businesses and institutions worldwide. He discussed how design-led companies, such as Apple, Coca-Cola, IBM and Nike, have outperformed the S&P 500 during the past 10 years by an extraordinary 219%.

“If we assume that customers know what they want, there will be no innovations,” Hoffer explained. “For instance, we didn’t know taxis were broken until Uber fixed them.”

McKinsey’s approach to design thinking is to first understand the customer. Next, break patterned thinking with lateral thinking. “Find out what customers need and build a solution,” he advised.

Fenske Media has done just that. Bringing in decision-makers for a Design Thinking Summit, helps build excellence in its customers and keeps its own marketing services top of mind.

And how could one not notice the 97-ft.-long, multimillion dollar piece of equipment, humming softly behind a wall of glass?

Eric Owen, Kodak’s VP and worldwide director of sales and marketing, explained the unique technology of the Kodak Prosper 6000C continuous-feed inkjet press and the importance of print in digital marketing.

“Many people think print is in decline and old-fashioned,” Owen said, “but we think it’s just in need of transformation. Print can’t continue to exist the way it has existed for hundreds of years. It has to be based on digital technology to give you something to manipulate — and that is data.”

Owen explained how variable data printing creates greater relevancy. “Less things may be printed, but they will be more impactful,” he said.

Fenske noted that his company, established in 1957, has evolved to incorporate big data. The installation of the Prosper 6000C is a continuation of the firm’s belief in the importance of digital printing within cross-channel marketing.

Jerry Norman of Fenske XM showed off the company’s Hiperwall, a series of 12 interlocking video screens that display high-level data and concepts. He joked that it is also used to broadcast football games during weekend shifts. At any rate, one look at the colorful wall, and there is no doubt Fenske has a solid foundation in data and analytics.

Equally impressive was a disruptive technology demonstrated by Jeff Swaim, CEO of Influence Technologies. Short for interactive video experience, iVX is similar to a video game or “choose your own adventure” book in that it allows companies to create personalized, two-way conversations that engage consumers while collecting micro-analytics.

Of course, the day included a tour of the Fenske Media facility and a catered lunch on the pressroom floor. Rick Mazur, worldwide director of sales operations for Kodak, and Jennifer Pennington, Kodak’s paper and substrate scientist, led small groups around the Kodak Prosper 6000C. The press replaces Fenske’s Prosper 5000XL, which was installed in 2011 [in 2008, Fenske installed the first Prosper 5000]. Producing 56 billion droplets of ink per second, the 6000C features interstation dryers that can remove three liters of water per minute.

At the end of the day, customers like Dan Acker, CEO of Sentinel Security Life, came away with new knowledge about current printing technology, video marketing and how important design thinking can be when engaging with clients.

“As a mid-size insurance company, we need to continually find new ways to use technology to be more efficient and competitive,” Acker commented. “By using on-demand printing, we will be able to lower our printing costs, react more quickly when updates are needed and reduce waste.”

Before the sun set behind the Black Hills, attendees were treated to a trip to Mount Rushmore, a true example of design thinking at its best. At the time of the Great Depression, one could say the nation didn’t see a need for a grandiose sculpture 6,000 ft. above sea level. But today, celebrating 75 years, the memorial attracts nearly 3 million visitors per year to marvel at its ingenuity and the growth of a nation.