Topping the annual honor roll of the Printing Impressions 350 are its “Fast Track” companies: a sampling of those with significantly higher rates of year-over-year revenue growth than other listees. We profiled six outstanding performers.

It’s important to remember that the year-over-year sales figures reported by PI 350 companies are for the most recently completed fiscal year, and the one immediately preceding it. This means that in 2020 — for the majority of the companies that report calendar fiscal years — we are presenting 2019 versus 2018 comparisons that do not reflect the economic impact of COVID-19 on the industry, although nearly every listee experienced its effects at some point during the year.

However, we believe that the 2020 PI 350 remains an accurate index of the business strength and structural diversity that the printing industry will continue to display once the pandemic is finally behind it. As we hope profiles like the one below show, the attributes that put printing companies on the fast track are constants in the industry. They’re available at all times for other companies to emulate and, by sharing these stories of excellence, that’s precisely what we’re encouraging everyone who reads them to do.

Our congratulations to 2020’s Printing Impressions 350 Fast-Track firms, and our best wishes to all printing companies who made the most of a tough year. 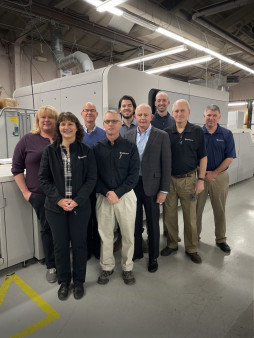 Kevin Naughton says that personal faith, financial discipline, and a commitment to systemization will make PrintComm the employer of 400 people by 2030. Seventy-eight work there now. Leveling up to the bigger number is the objective of the PrintComm 6x initiative, conceived by Naughton, the company’s owner and president, as a way to make things better for residents of PrintComm’s economically hard-hit hometown.

Getting there will require 10 more years of at least 18% annual sales growth in PrintComm’s data-driven printing and mailing services, a fast-track pace that Naughton is confident the company can sustain. “That’s just the goal, and we’re going to try to hit it.”

Purposeful single-mindedness has been the keynote of Naughton’s management style ever since he bought the company nine years ago. He has worked there for 39 years, having come to it as an employee almost straight out of college.

For most of that time, he says, the company operated as a general commercial printer with a handful of direct mail accounts. Under his direction, PrintComm has pivoted almost entirely to direct marketing, printing, and mailing millions of pieces per month along with the “smattering” of commercial print that remains.

Digital by the Dozen

PrintComm has equipped for the task by installing a total of 12 new digital presses from Canon, Ricoh, and Kodak over the past year and a half. The company also has invested in the kinds of IT assets and VDP software needed for jobs that could involve RIPping data for hundreds of thousands of postcards at a time, in order to meet the requirements of service level agreements.

“We spend a lot of money on server space to process those massive files,” Naughton says.

He identifies “our data expertise, and our ability to do high-level execution on relevant direct mail” as PrintComm’s main competitive strengths. These services can be performed for clients in support of customer acquisition, retention, and reactivation, or to help execute new store openings for franchisees, dealers, and agents in multiple locations.

The company also provides data analytics, as well as assistance with postal processing, project management, Web-to-print storefronts for marketing collateral, and design. Everything bears out Naughton’s claim that “we’re really good at developing systems here — we are highly systematized.”

At PrintComm, the benefits of systemization are measured not just with data, but in dollars and cents. “Our job isn’t just to take money and print stuff,” Naughton asserts. “If the customer doesn’t make money on it, it goes away.” This means being prepared to quantify ROI and, sometimes, to manage the budgets for entire campaigns on the customer’s behalf, mapping out when, where, and on what the money will be spent.

Naughton says he gets his penchant for careful budgeting from his mother, who was a financial secretary for a school district. It also shapes how he thinks about acquiring new equipment, which he says should never be based on “build it, and they will come” assumptions. The purchase either has to provide capacity for work already in hand, or it must support the needs of customers who want to increase their volumes with PrintComm.

This rationale underlay Naughton’s decision to replace a 21-year-old, 40˝ offset press with a new full-size machine that will be installed in the 47,000-sq.-ft. plant the company will relocate to in the spring of 2021. By then, Naughton expects to be back on track to the pace of growth that will fulfill the aspirations of PrintComm 6x.

He says COVID-19 did some damage to the top line in March, April, and May of 2020, including the loss of a $1.7 million day planner job that the company had produced for years. Those months, however, were a blip bracketed by other months of much stronger performance.

Some temporary layoffs were necessary, but Naughton says that as soon as the company secured funding under the federal Paycheck Protection Program, “we brought everybody back. I didn’t want anyone sitting at home worrying.”

Continuing uninterrupted is PrintComm’s charitable work, which has included support for the homeless population of Flint, as well as contributions to relief efforts in Africa and South America. “We are blessed to be a blessing to others,” he declares. “I am real quick to give credit to God for what is happening here.”