Graphics of the Americas 2016 Successful; Moving to Ft. Lauderdale in 2017 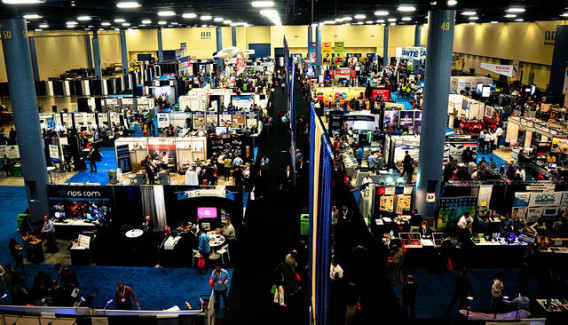 The Graphics of the Americas 2016 Expo Floor.

ORLANDO, Fla. — March 18, 2016 — GOA president James Martin has declared the 41st Graphics of the Americas (GOA) event a success in terms of content, lead generation and attendance. Over 200 exhibitors, as well as attendees from close to 100 countries participated in this year's show in Miami Beach, Fla., and 1,200 attended GOA's renowned educational seminars, offered in both Spanish and English.

Martin says that GOA would continue to expand on popular activities and showcases his predecessor, George Ryan, instituted during his tenure. Martin will also bring a more significant packaging presence, as well as digital printing, digital finishing and wide-format inkjet components. "GOA brings many valuable programs to a unique and highly loyal audience of exhibitors and attendees," he said.

Some of the most loyal are officers and members of CONLATINGRAF, the Latin American Graphic Industry Confederation that will celebrate its "Golden" 50th anniversary at GOA 2017. The partnership between the Printing Association of Florida, which hosts and produces GOA, began at GOA's inception, over 40 years ago.

GOA Educational Seminars
Over 1,200 attendees participated in another GOA favorite: its popular educational seminar tracks. "We are receiving overwhelmingly positive feedback from companies of all sizes, and from all over the world," Martin commented. 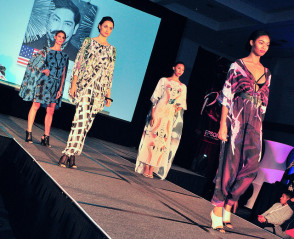 Scene from the Epson Digital Couture Fashion Show at GOA 2016.

Busy Show Floor
GOA attendees had the chance to see a variety of the latest technologies being demonstrated live on the show floor. These special expo areas included, but were not limited to: The Flexo Zone sponsored by Nilpeter; the Wrap Cup Americas Competition, hosted by MR ClipArt and sponsored by 3M; the Dye Sublimation Application Center, sponsored by Epson; the Short Run Digital Center, sponsored by UniNet and Kompac and UPM; the Direct-to-Garment Center, sponsored by Oki Data Americas; and Wide Format Print Shop Live!, sponsored by HP, Caldera, Zund and Gilman Brothers.

CONLATINGRAF will Celebrate 50th Anniversary at the 2017 Event
GOA is honored that special partner CONLATINGRAF, the Latin American Graphic Industry Confederation, will be celebrating its special 50th anniversary "Golden Year" at GOA 2017.

"We are very excited about strengthening the partnership with PAF," CONLATINGRAF President Fabio Arruda Mortara says of his organization's relationship with the Printing Association of Florida (PAF). "CONLATINGRAF is in a process of revitalization of the entity and we are striving with PAF in a united way, to strengthen the printing industry in Latin America and the Caribbean."

What the Exhibitors Are Saying about GOA 2016

"(On the) first day of the show, one of our dealers who use Graphics of the Americas as a great way to show new technology to their customers — brought a customer that purchased our iJetColor system before we were able to get coffee. It's a testament to GOA that so many people depend on this February event in Florida.  We'll be back next year with more equipment to sell." — Tim Murphy, president, Printware

"This was my 12th year exhibiting at GOA, and I am always amazed at how many international dealers and printers attend this show. I really love this show — the location, cultures and attendees create a magic that is uniquely successful." — Daniel Rizika, president, PrintGuard

"Zund America is pleased with the results from GOA this year. Wide Format Print Shop Live!, where we collaborated with Caldera, Gilman Bros, and HP to show a complete print-to-cut workflow, is a great opportunity for exhibitors and attendees alike. It highlights the importance of evaluating not just individual components of a digital production workflow, but how easily and harmoniously they will work together to create an efficient and productive whole-from prepress to printing and finishing." — Beatrice Drury, director of marketing and communications, Zund America

"Our booth at Graphics of the Americas this year was a huge success.  We met many new local customers, as well as companies from other states, the Caribbean and Latin America.  The number of sales we actually closed at the show was a new record for us." — Antonio Nadais, CEO of SID SIGNS USA

About Printing Association of Florida (PAF)
The Printing Association of Florida is one of the most active and influential printing associations in North America, with headquarters in Orlando, Florida. More than 300 Florida-based graphic arts companies consider PAF their ultimate business partner. Governed by an all-volunteer board of directors elected by its membership, PAF is a not-for-profit association representing the interests of the graphic arts industry throughout the state. PAF is affiliated with Printing Industries of America, the world's largest graphic arts trade association.

About Graphics of the Americas (GOA)
Graphics of the Americas, produced annually by the Printing Association of Florida, will take place on Feb. 16-18, 2017 at the Greater Fort Lauderdale/Broward County Convention Center in Ft. Lauderdale, Fla. GOA is one of the graphic communications industry's largest, annual, combined expositions and conferences. GOA is a unique event attracting printers, designers, and creative professionals from North America, Central America, South America, the Caribbean, and all corners of the world.