Here's the next installment in our continuing series of republished “Otto’s Night Watch” columns written by Otto Boutin, which appeared monthly several decades ago in Printing Impressions. In this week’s short story, Otto decides he'd rather hit the road as a salesman rather than stay stuck in the shop as a Linotype operator. One assignment given to him is to repossess two machines housed at the Weekly Buzzard in the hills of Alabama. He soon finds it's a job that he's not cut out for — and that the locals treasure their local weekly newspaper. Enjoy!

When Possession Was All Points of the Law

There are times when every Linotype operator feels like a dismal larva trapped in a gray cocoon. He can hardly wait to break loose, spread his wings, and be a happy butterfly.

I was setting type in Nashville when I obeyed an impulse to become a rootin’ tootin’ go-getter of a salesman. I got a job with a dealer of printing equipment and exuberantly drove all over Kentucky, Tennessee, Arkansas, Alabama, and Mississippi. I peddled foundry type, slugs, and second-hand mats. I also took orders for machinery and collected bills along the way.

One day it was my duty to drop in at the Weekly Buzzard in the hills of Alabama. The proprietor was sitting at a Model C Intertype, working steadily. He was a gaunt man with furrowed cheeks and shaggy gray hair. 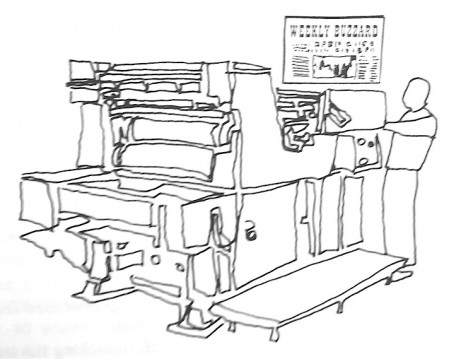 I swallowed hard to make sure my voice would have the proper authority. Then I said, “I’ve come to repossess this machine. You haven’t been paying your notes.”

The old man rose slowly to his feet, studied me as if I had crawled out of the woodwork, and reached to the wall for a double-barreled shotgun. He lay the gun across his lap as he sat down at the machine and continued setting type.

“You ain’t gonna take no machine, no how,” he snarled.

“But, sir”, I reminded him. “You haven’t been paying. And I also have to take back that Ludlow.”

The little old lady who had been standing at the Ludlow gave me a dirty look. She picked up a cushion, put it on the hot machine and, with great agility for her age, sat upon it. Staring at me scornfully, she spit into a spittoon and said, “You ain’t gonna take my Ludlow neither.”

The gun clicked as the man pulled back one of the triggers. “Don’t you go giving no trouble to my wife,” he said, “or I’ll blow your head off.” The other trigger clicked. I ran out, looking for the sheriff.

I found him across the street, leaning against the bank. Sun-bronzed, with cauliflower ears, he seemed to be expecting me.

“Look,” I said, “I’ve got these repossession papers. The law says that I’m allowed to take the machines back. All I want to do is get the machines on a loading platform so our truck can pick them up tomorrow. They’re already sold to a newspaper in Arkansas.”

The sheriff studied the papers, mumbled to himself, and accompanied me to the Weekly Buzzard.

“Look, here, Ebenezer,” he said to the proprietor. “This man’s got a right to take the machines. That’s the law. It says so here in these papers.”

Turning to me, the sheriff said, “You’ve got one hour, mister, to get the hell out of this shop with your machines.”

“One hour. It says here in the papers that you should have a reasonable time. One hour is plenty reasonable. After that you can get shot for trespassing. And I mean that the machines have to be all the way out of the shop.”

I decided to drag the machines through the back door out into the alley. I would throw a tarpaulin over them and stand guard overnight. Next day our truck would pick them up.

I ran to my station wagon, where I kept all kinds of tools. I didn’t bother to lock my doors because I kept running back and forth. I loosened bolts, clipped electric wires, and tapped gas pipes. Then I ran to the local garage to get a tow truck with a winch. It took some time to find an additional ten yards of steel cable.

With eight minutes to spare we were dragging the Ludlow through the shop. The old lady was still sitting on it, trying to keep her balance as she yelled rebel profanities. The old man sat at the disconnected Intertype, fondling the shotgun as he watched the clock.

Then the sheriff barged in. “That tow truck’s got to get out of there!” he yelled. “It’s against the law to park in that alley.”

The steel cable slackened. The garage mechanic unhitched it from the Ludlow and drove his truck away.

“And another thing,” said the sheriff, rubbing his pancake ear. “Is that your car parked in front of the bank?”

He was right. There was a portable No Parking sign right beside my car. I knew I had been framed, but I tried to keep my temper.

“There’s more to it,” drawled the sheriff. “It struck me kinda peculiar that a Yankee with a Tennessee license should park in front of an Alabama bank. You weren’t aimin’ to hold up the bank, were you?”

“I’ve got to examine your car,” said the sheriff. “On grounds of suspicion.”

“Somebody put them there.”

“They’d come in might handy for blowing up a vault. We’ve got a nice little bank here, mister. We don’t like no Yankees comin’ down here to blow it up. And lookee here … a real nice tommy gun.”

“That’s not my gun,” I insisted. “I haven’t seen one of those for 20 years. Besides, it’s harmless. The ammunition clip is gone.”

The sheriff playfully fanned it along the sidewalk. “Rat-tat-tat,” he chattered. “You could scare the hell out of our poor old bank president. I’ve got to lock you up, mister. You ain’t up to no good.

He shoved me into the dungeon behind his office.

“This may take some time,” he said. “I gotta check your fingerprints with the FBI. Sometimes they work kinda slow.”

“I have a legal right to make a phone call,” I insisted.

He scratched his mangled ear. “Go ahead,” he said, moving the phone so I could reach it through the bars. “The law says you can make a phone call.”

Three times I tried to reach my boss in Nashville. Three times the local switchboard operator connected me with a cockroach exterminator in Knoxville.

The sheriff took the phone away from me. “The law says you’re allowed one call. I gave you three. So shut up.”

The following afternoon I asked the sheriff if our truck from Nashville had picked up the machines.

“Some kind of truck was here,” the sheriff admitted. “But the driver couldn’t find a place to park. This is town hall meeting day and all the farmers come in. On this day they’re allowed to park everywhere, double park and triple park. It’s the local law, you know. And there’s so many cars around the Weekly Buzzard, even in the alley, that the truck couldn’t get anywhere near the machines. So the driver did a lot of cussing and went back to Nashville.”

“May I write a note to my boss?” I asked humbly.

“Sure. Here’s paper and an envelope.”

“Too bad about your job,” said the sheriff, unlocking the iron door. “And you ain’t even a successful bank robber. The FBI’s got nothing to match your fingerprints.”

“Go ahead. Here’s the keys to your car. But I have to keep the dynamite and tommy gun.”

“Keep them. They’re yours anyway.”

He showed big healthy teeth as he grinned.

“And another thing,” he added. “I brought you a copy of the Weekly Buzzard. Right off the press. It’s a pretty good paper for a town like this.”