The financial overview includes only the Company’s continuing print operations. The Company sold Alstyle Apparel on May 25, 2016, resulting in the apparel division being classified as discontinued operations and the print division remaining as the continuing operations of the Company.

To provide important supplemental information to both management and investors regarding financial and business trends used in assessing its results of operations, from time to time, the Company reports adjusted gross profit margin, adjusted earnings and adjusted diluted earnings per share, each of which is a non-GAAP financial measure. To provide additional information, the Company also reports the non-GAAP financial measure of EBITDA (EBITDA is calculated as earnings from operations before interest, taxes, depreciation, and amortization).

Keith Walters, Chairman, Chief Executive Officer and President, commented by stating, “Overall, we were pleased with our operational performance this fiscal year and our ability to successfully put the negative overhangs of the prior fiscal year behind us. Changes we implemented last year have resulted in our health plan costs being more in line with historical averages, and the negative impact of the relocation and start-up of a folder operation appears to be fully behind us. The acquisition completed at the end of the 2017 fiscal year continues to out-perform our expectations, adding approximately $36.0 million to our revenues and contributing $0.13 to our diluted earnings per share this fiscal year. We are encouraged by the recently enacted Tax Cuts and Jobs Act of 2017 and the potential positive impact it may have for all U.S. manufacturers. In the fourth quarter we shared the savings the Company realized from the Tax Act by paying each of our non-management level employees a $500 special cash bonus and paying our shareholders a special one-time cash dividend of $0.10 per share. Going forward, although the print industry remains challenging, we are optimistic about our ability to navigate these waters and continue to return positive financial results to our shareholders. We have strengthened one of the strongest balance sheets in the industry and continue to improve our cash position.” 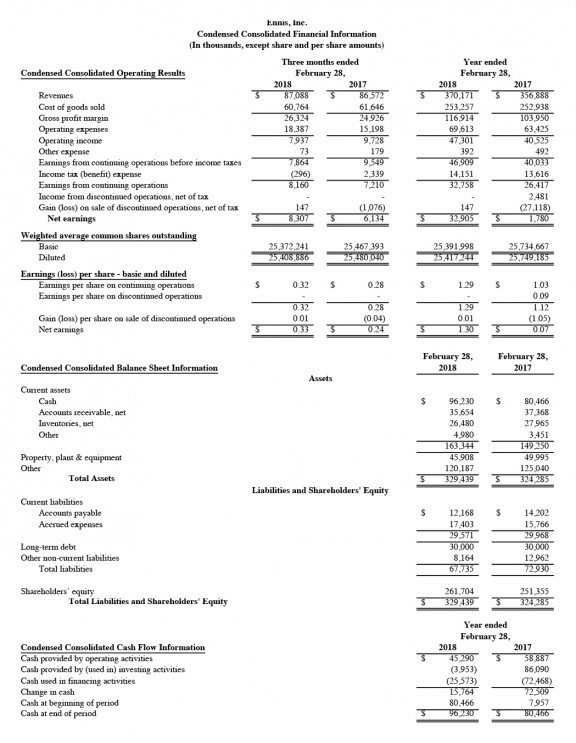