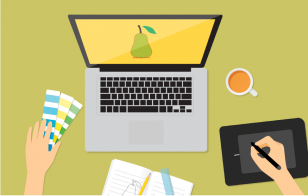 And that she has. Last year, Gooding and fellow ink-on-paper guru Mary Schilling teamed up on “The Designer’s Guide to Inkjet” [published and printed by Canon Solutions America] that, despite its title’s suggested audience, is an indispensable tool for any inkjet printer’s library. The problem with graphic designers/creatives, printers and inkjet is the same stumbling block as graphic designers/creatives, printers and any production process. There is too much disconnect — the designer is far upstream from the printer.

In the end, if there are any issues that arise with submitted files, it’s often easier for the printer to fix them and then go on-press as opposed to kicking it back upstairs to the customer’s designer. The printer may be swayed to pass along some ex post facto admonitions to keep in mind for “next time,” but that’s akin to taking an aspirin after your headache has subsided.

“In these situations, the disconnect leaves the printer as either a referee or the scapegoat when the piece doesn’t come out as the customer was expecting,” Gooding observes. “It’s in printers’ best interests to provide education; they need to educate all along that food chain so that their customers are both satisfied with the design and the way that design ends up being printed on the equipment.”

Part of the problem is that graphic designers aren’t trained to produce work for various output devices. Gooding says the problems stem from designers not understanding how the dots go on the paper, and how different types of papers absorb ink. When a job is ticketed for high-speed production inkjet by nature (read: personalization) the stakes of shorter runs are raised due to the cost of the inkjet inks. Adding too much liquid to a page that is twisting and turning can be a costly mistake.

“It just hangs up finishing equipment, or it smudges, smears, runs, doesn’t perf well and doesn’t go in the envelope,” she says. “All of these bad things can happen if the designer doesn’t understand that you shouldn’t put too much ink on the page.

“Designing for inkjet can produce great results; it can be cheaper to offer personalization and versioning. The printer who can get out in front of the process and provide general guidelines — even if the design has already been completed — can help minimize the errors that exist in customer files.”

Some of the more common pitfalls that occur when designers don’t know how to conceptualize for inkjet include:

“With a classically trained fine arts designer, you think of a piece of art that is produced,” Gooding relates. “But the designs that we’re talking about are reproduced multiple times and often manipulated during the process of being reproduced. There could be data added to it or there could be color changes. Just at that fundamental level, how could you possibly expect a designer to be able to create something if they don’t understand the process through which what they’re designing is going to be reproduced?

“There’s a real void in the marketplace as to who is going to give them that understanding. I’m not aware of anyone providing this kind of training for high-volume production digital printing.”

Co-author Mary Schilling, an expert on color, substrates and inks, points out that issues arise when designers don’t have a consistent color space with the output device that is being targeted. Many designers use SWOP or are fairly oblivious — using the color space that was the default of the software. She recommends GRACoL (General Requirements for Applications in Commercial Offset Lithography), the largest color space.

Problems arise when there’s a mixture of design programs that don’t sync: For example, Adobe Photoshop using SWOP, Adobe Illustrator using GRACoL, Adobe InDesign using something else. The downfall is a mixed bag of elements that needs to be converted multiple times.

“If they are editing an image on their monitor, most designers do not keep up with maintaining their color calibration,” Schilling says. “They go by a visual color correction; they don’t know how to calibrate by the numbers. Then when the printer converts the files to the [inkjet] output color space, the job may not reproduce on-press what the designer had expected. Designers are coloring with one set of crayons and the printer is using a different set of crayons.”

Expanding on Gooding’s caveats regarding ink coverage, Schilling notes the importance of understanding what happens to a color as it’s being absorbed into the paper. A true, clean magenta or cyan, depending on the paper’s whiteness/brightness, is going to appear darker or even dingy. It’s the balance between absorption and evaporation of the aqueous inkjet.

It is incumbent upon the printer to provide the necessary education for its clients, and ostensibly, the designers. If your shop uses “house papers,” then create a catalog for your customers of different images using process colors, printed at different tack levels or coverage amounts. Thus, they will have samples of how a given paper will react when married with inkjet ink. 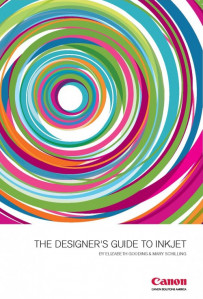 Schilling says it’s equally important for the internal staff at a printing company to be fully versed in the art of inkjet printing. “If salespeople don’t understand the process, or the characteristics of the paper and the ink, they can’t talk to their customer intelligently about it,” she says. “They can’t explain why the color looks dingy; they will just come back and say the client doesn’t like the green.

“Understanding the exact target color by lab values and not relying on visually evaluating color under uncalibrated lighting conditions is one of the most important aspects of matching customers’ color expectations. Sales teams should be versed as well as equipped with the latest measurement devices to ensure, when meeting with customers, they are walking away with an agreed upon target color for the printer to match. This process always seems to be after the fact, which adds time and expense to the job. Aqueous inkjet color on different substrates produces different color variances, thus you must approach color matching methods differently. SIC’s program, which focuses training sales and customers as a team, has bridged this communication gap well for many customers.”

One shining example of a printer that is detached from the creative process but has cultivated a system that ensures a minimum of challenges is Epsilon. A little more than a year ago, the company installed the country’s first Screen Truepress Jet520 HD continuous-feed inkjet press. Prior to that, the shop had 10 years of experience working with Xerox iGen digital presses.

Impressive Winning Percentage
Nate Milliken — VP/managing director of the $2 billion a year marketing giant’s print production facility in St. Louis — and his staff worked with Schilling to create a user’s manual for the cadre of 300-odd designers in Epsilon’s employ. As a result, Milliken and his crew are able to push through the files with a problem-free rate rivaling Ivory soap’s purity level.

“I have to give kudos: 99.99% of the time there’s not a problem and some of the campaigns have as many as 1,200 different variables,” Milliken says. “We worked with Mary to form documentation and lessons learned. Screen helped as well. So now we can provide a tool specific to the inkjet press as a result of the challenges that have arisen in the past.”

Milliken likens his shop to the Mississippi River, with the tributaries consisting of creatives and designers flowing their files downstream. The campaigns they develop often cross numerous delivery channels — Web, social media, print — and, in doing so, can pull in creative elements that may work for one channel but not another.

“We have legacy platforms that are literally template-driven,” he says. “Those are fairly mature tools. We have very few problems for digital output coming from our legacy platform tools. But some of the newer tools or ad hoc programs — where you’re doing a quick mailing for a spring event, for campaign strategy — may pull in an RGB element. We may catch it when we preflight the work, or we’ll catch it when doing proofing at the press. What the designer saw on the monitor isn’t what the press prints.

“We’ll capture the problem and, if time allows, communicate that back upstream to the designer team. They’ll then correct the file and send it back. But if timing’s a problem, we’ll just fix it internally.”

One thing Milliken has done to mitigate issues is limit the types of substrates used. He relies on Mitsubishi Sword iJet inkjet stocks exclusively; in the first year, the company pushed 2,600-plus rolls of paper (144 million A4 pages) through the Screen Truepress Jet520 HD in matte and gloss sheets, 7- and 9-pt.

“I haven’t brought in another stock because I don’t want the variability of the press,” he says. The Truepress has responded well in kind, with only 88 hours of unscheduled downtime so far through its first 3,400 press hours in operation.

Percentage of Ink Coverage Matters
Still, Milliken appreciates that the design drives production; it’s the tail that wags the inkjet dog. “You don’t want to tie designers’ hands; they want to be conceptual in their designs,” he says. “Our biggest expense with inkjet is the ink itself. We make sure they understand the increased costs of using lots of inks. Less ink coverage, from a cost standpoint, is much more attractive. So we try to guide them in that direction.”

One company that has elevated the process of handling production inkjet design files to an art form is IWCO Direct of Chanhassen, Minn. The direct mail giant provides customers and their designers with spec sheets and guidelines for production inkjet printing file preparation, plus it has its own design department and creative services to aid in the process, notes Dave Johannes, senior VP of operations.

Other than the occasional design straying outside the printable area, Johannes says that most of the issues that crop up involve the preflighting of assets that are being used in the imagery, such as the photography not being optimized for digital printing. Color corrections are another common housekeeping item prior to printing.

“We have the ability to provide a lot of guidance through client services to customers on how to lay jobs out and get the best utilization of print areas,” Johannes notes. “Early on (in inkjet printing), we used to run into color corrections, low-res images, which is why we put in a lot of front-end tools to clean up the workflow. Now we can handle it all before the job gets to the press.”

Ink and substrate issues are nonexistent for IWCO Direct. The company has qualified about 50 substrates, with three of the top 10 papers most used accounting for about 60% of the overall volume. That can be mainly attributed to the needs of direct mail customers, most of whom fall in the 50- to 70-lb. range, with self-mailers requiring 7- to 9-pt.

As for advice to printers who are new to inkjet? Johannes simply recommends getting a copy of “The Designer’s Guide to Inkjet.”

“From ink, paper, layouts and ways to optimize imagery, it covers all the important talking points,” says Johannes, who contributed content for the book. “It covers the bases for all the things you should consider. We’ve given lot of them out to our customers.” PI