With DuraLink, Memjet Enters Its Second Generation of Inkjet Innovation

If you associate inkjet printing strictly with inkjet presses, take a step back. A press is a platform—significant, but secondary. The underlying technology is what makes it a printing device. This is the story you should know about inkjet innovator Memjet.

Memjet doesn’t build digital inkjet presses, but it’s as committed to advancing digital inkjet technologies as any of the original equipment manufacturers (OEMs) that do.

Since 2004, Memjet has been developing high-performance inkjet heads and related components for OEMs to install in a variety of inkjet printing devices under their own brand names. It’s been a smart strategy for the company, enabling it to drive an installed base of more than 10,000 Memjet-powered solutions of all kinds since the appearance of the first such product in 2007. 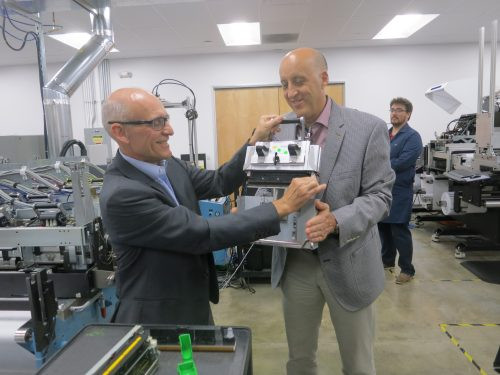 Most of those implementations, however, have been in desktop equipment. Now, Memjet has its sights set on bigger machines and more lucrative markets. With the introduction of a new printhead technology called DuraLink, Memjet will try to cultivate OEM partnerships that lead to the development of full-scale digital inkjet presses for commercial print and packaging production.

Memjet made the announcement about DuraLink to a small group of journalists and analysts at its San Diego, Calif., headquarters on August 22. It also outlined future plans for VersaPass, its original inkjet head technology, which will now be reserved for wide format and labeling applications. 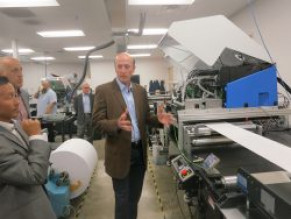 Ink-Cascading "Waterfall”
Memjet holds more than 3,000 inkjet-related patents and was, according to CEO Len Lauer, the first company to market “page-wide” inkjet heads capable of imaging the full width of an A4 sheet.

Initially dubbed “Waterfall Printhead Technology,” the solution consisted primarily of a fixed, 8.77" printhead module emitting 700 million droplets per second droplets across the breadth of a page from a matrix of 70,400 nozzles. This single-pass printing method was said by Memjet to be more efficient, higher in quality, and faster than the back-and-forth action of a moving printhead.

The first-generation product, now being marketed as VersaPass, used aqueous, dye-based inks and could place up to five heads side by side for a total single-pass printing width of 42". In DuraLink, Memjet offers OEMs pigment-based inks, greater speed, longer printhead life, and the ability to stitch as many as a dozen 8.77" heads in devices printing up to 2.5 meters wide for a printing area of 100".

The value proposition to partners that make presses with DuraLink heads includes flexible integration, rapid time to market, and ease of support once the presses are installed. Commercial and packaging printers are promised high-quality, high-speed inkjet printing in up to eight colors at a competitive cost per page.

Besides representing a technological leap forward, DuraLink also is Memjet’s bid to rise in the hierarchy of digital print equipment suppliers.

To date, Memjet has worked with about 30 OEM partners, mostly smaller producers with a few in the front rank. Now, said Gianluigi Rankin, director of product marketing, the collaborators Memjet hopes to attract to DuraLink are “first tier” OEMs: partners he defined as having “established product and market presence with experienced development, service, sales, and marketing resources.”

Also to be courted are second tier OEMs with less heft but with the intention of “working towards disrupting and entering as a primary market share participant” with Memjet, Rankin said.

DuraLink partnerships, according to Lauer, will enable Memjet to leverage the commercial print market, which the company sees as the largest potential application for DuraLink. OEMs with which it is currently working in this area include SuperWeb, Halm, Winkler+Dünnebier, and Colordyne Technologies. 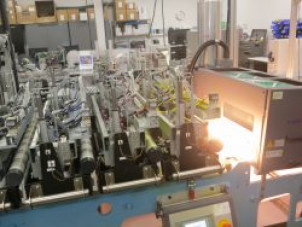 DuraLink in a test on a 25.5" wide press platform with near-IR drying.

Potential for Packaging
Folding carton and corrugated packaging also can become applications for DuraLink by adding heads not just to presses but to converting and finishing lines. Partnering in packaging with Memjet, which is a sponsor of the Digital Packaging Summit in October,  are CMC, IPT Digital, New Solution, and Xanté. Textile printing represents yet another area of opportunity for the company.

Look for “household names” among OEM suppliers of production inkjet equipment to be on board with DuraLink in the near future, said Lauer, who added that Memjet has been “very encouraged” by talks and beta tests it has engaged in with potential first- and second-tier partners.

He estimated that it would take an OEM nine to 12 months to develop a working press after receiving the DuraLink components from Memjet. Rankin said that while Memjet doesn’t control the launch schedules of its partners, “we anticipate seeing the first DuraLink solutions being announced in the second half of 2018.”

Lauer said that most of DuraLink’s competition will come from piezo inkjet technology, which he characterized as harder to integrate than DuraLink’s thermal drop-on-demand architecture. He identified the “sweet spot” of the market for DuraLink-equipped presses as the under $1 million category, where devices like the Canon Océ VarioPrint i300 and Xerox’s Brenva cut-sheet inkjet presses are trying to establish themselves.

DuraLink will be most competitive, he said, in a “disruption zone” where piezo DoD presses selling for under $1 million and consuming 300 to 4,000 liters of ink per month struggle because of the costs associated with them.

OEM partners will build the disruptive presses that Memjet envisions around a modular system that includes printheads, supporting modules, RIP-friendly software, and pigment ink. Eric Owen, general manager of commercial press, suggested thinking of the modular components as analogous to “Lego pieces” or the ingredients in “Blue Apron” meal kits, designed for do-it-yourself assembly out of the box.

Although up to now, he said, Memjet’s practice has been to supply complete print engines and leave the adaptation to the OEMs, DuraLink’s modular approach lets them use more of their own “creativity” in fashioning the final product.

It’s All in the Ease
Lauer emphasized the ease of integration that OEMs will experience in making DuraLink heads the basis of their inkjet platforms. He said that DuraLink’s built-in integrability would lower the capex cost of presses using the technology by 25% compared with piezo equipment.

Memjet furnishes the core components of DuraLink for OEM partners to house in working presses. The centerpiece of Memjet’s contribution is the printhead module, which Owen described as a proven design to which invention and innovation have been added.

The DuraLink printhead is 8.77" (228 mm) wide, with a .7 mm print zone. The 2.2 picoliter droplets its 70,400 nozzles emit are about twice the size of VersaPass droplets, but they’re minuscule enough to achieve a maximum resolution of 1,600 x 1,585 dpi at a printing speed of 245 feet per minute. Three additional speed-resolution modes, with 668 fpm output at the top end, cover a full range of quality and productivity benchmarks for commercial, packaging, and industrial printing.

For example, bonding the heating element of the nozzle’s tiny (25 microns wide by 52 microns deep) ink chamber to one side of the enclosure increases efficiency and significantly extends nozzle life. Because DuraLink addresses each pixel on the page with a column of five nozzles, it’s possible for one or even two of the nozzles to misfire without producing imperfections the eye can detect.

Precision microelectronics embedded in the nozzles enable a firing rate of up to 15,500 drops per second from each one. The company calls DuraLink’s thermal drop-on-demand design superior to piezo DoD in drop placement, volume, stability, and flow rate.

DIY for OEMs
The partners are tasked with assembling the modules into the numbers of single-color print bars they need for the types of presses they have in mind. Memjet says the inherent scalability of DuraLink’s architecture will let OEMs construct presses up to 12 printheads wide and up to eight printheads deep on the web for a total of 96 printheads for simplex printing or 192 for duplexing.

It’s also up to the OEMs to add value in the form of print engine chassis, substrate transport systems, dryers, bulk ink supply, and other mechanical necessities—their native areas of expertise as press manufacturers.

In partnership with Kao Corp., Memjet will be the sole source of DuraLink aqueous pigmented inks, which are formulated for durability, water fastness, and offset-like quality in high-speed commercial and packaging production. Knowing that primers and precoats will be needed to make the ink compatible with coated offset papers and certain other grades, Memjet is working on developing the appropriate treatments.

Owen said Memjet is working to balance the cost of the heads with the cost of the ink so that cost-per-page with DuraLink will be competitive in the commercial print marketplace.

DuraLink will not be a retrofit for equipment using VersaPass technology and is not intended as a replacement for it. VersaPass, Memjet’s aqueous, dye-based solution for single-pass inkjet printing in labeling and wide-format applications, will make up half of the company’s exhibit in booth 3822 at PRINT 17. DuraLink will be the other half, along with presentations by co-exhibiting partners.

The name on the booth derives from MEMS, the proprietary micro electromechanical systems technology that has been its focus for the past 13 years.

Memjet first demonstrated page-wide inkjet printing in 2004; the first device with a Memjet head appeared three years later. Lauer said that although office inkjet  equipment initially was the primary application for Memjet technology and still accounts for the biggest part of its installed base, it no longer represents the market the company will prioritize.

The technology’s debut for label and packaging was at Graph Expo 2010. A wide-format product was introduced in 2012, followed by the first commercial printing implementation in 2014. In 2015, Memjet sued HP for what it said was infringement of  patents related to its page-wide “waterfall” technology. A cross-licensing settlement reached in the following year resolved disputes between the parties.

Global and Giving
With corporate headquarters in San Diego, Memjet employs 320 people in 16 cities around the world. Its main center for inkjet R&D and head assembly is in Sydney, Australia. It also operates an R&D facility in Dublin, Ireland.

As a privately held company, Memjet does not disclose annual revenues. Its principal investor is George Kaiser, a businessman who is one of America’s leading philanthropists. Profits from the companies he finances help to support his numerous charitable and social programs, including the Kaiser Family Foundation.

Memjet’s markets include desktop systems, the largest segment, comprising devices that produce labels, mailing and addressing imprints, bar codes, and tags. The others are wide format, packaging, and commercial printing, The latter two are segments in which Memjet hopes to achieve the most growth through OEM adoption of DuraLink.

Up to now, with VersaPass, Memjet has chosen to work exclusively with OEM partners.  Rankin noted that because DuraLink targets the commercial printing and packaging segments, it may be possible to customize solutions for “select large end users” that have technical capabilities like those of OEMs.

But, he added that end users meeting this description represent no present business for Memjet and that their potential future contributions are unknown.