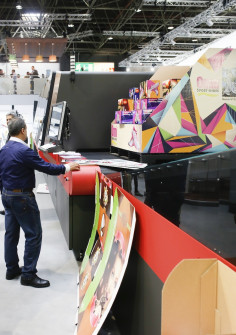 Inkjet printing on corrugated packaging was a surprising theme at drupa 2016.

The drupa exhibition has been the epicentral gathering point for the worldwide printing industry. With more than 250,000 visitors from 188 countries filling 19 halls to see the wares from 1,837 exhibitors representing 54 countries, drupa 2016 was no exception. It also continues to serve as a compass point that guides future direction from both new product and R&D technology standpoints.

In the past, drupa exhibitors kept their announcements under wraps, hoping to build excitement and buzz as the trade show progressed. That philosophy has changed, though, with most suppliers announcing key product introductions in advance, perhaps due to the realization that a minority of U.S. printers have the free time and funds needed to witness the 11-day extravaganza in Germany first-hand. And those lucky enough to attend drupa for a few days surely can’t trek through all 19 halls.

Based on pre-show events and advance press releases, I knew that digital packaging would play a key role at drupa 2016, but it was only after being there did I realize just how much so. Chalk it up to the realization by digital press, auxiliary and consumables suppliers that a) the packaging industry is still in an infancy stage from the standpoint of digital inkjet print production adoption, b) packaging is one industry segment that can’t be displaced and c) better profit margins exist for package printers/converters who serve brand owners and marketers that understand the intrinsic value of hyper-personalized, short-run packaging. And why all of the heavy emphasis given to inkjet printing on corrugated? Perhaps that’s due to the "Amazon effect," where consumer buying habits have shifted from in-store to online ordering and home delivery.

Show organizers originally announced that the next drupa dates for 2019 would be revealed during this year’s event. But, based on feedback from larger exhibitors that the costs to erect large stands, set up equipment and provide staffing was just too high for it to occur again in just three years, drupa will maintain a four-year cycle and will be held June 23 to July 3, 2020. I can’t wait to see what will capture all of the headlines four years from now.