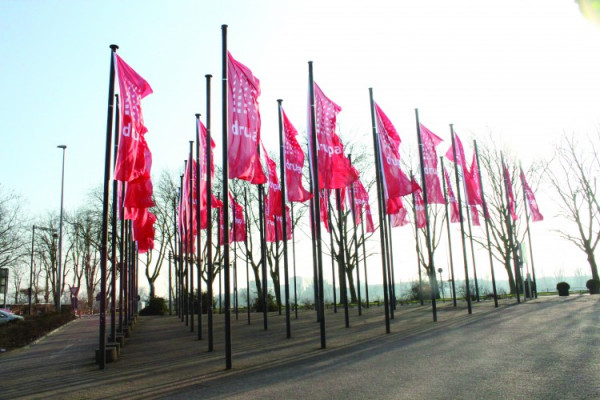 This impressive array of drupa flags pales in comparison to the 19 exhibition halls that comprise the fairgrounds. 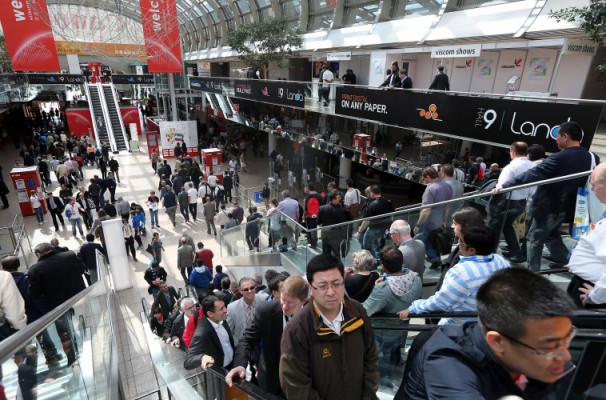 The bustling traffic of showgoers arriving at drupa 2012 may be surpassed when the 2016 event opens May 31.

The World Cup of printing industry exhibitions is finally upon us. We would have said Super Bowl, but soccer is more international and it’s held every four years. But now that drupa will take place every three years moving forward, well, we’re kind of at a loss.

Regardless, drupa 2016 arrives in Düsseldorf, Germany, where it will “Touch the Future” for 11 days between May 31 and June 10. About 1,650 exhibitors from 50 countries around the globe will occupy 19 exhibition halls. And believe it or not, about 16 of those halls won’t have inkjet-related technology. Themed attractions will be geared toward printing, packaging, multichannel communications, 3D printing, functional printing and environmentally sustainable “green” printing.

The trade show, as most of you are aware, is typically not a huge magnet for U.S. printers. Roughly 40% of the 314,000 drupa 2012 visitors were German folks and, of the balance, only 5% hailed from North America.

But even for non-attendees, drupa is a bellwether event; the dog that wags the industry’s tail. All of the chic unveils take place there. Wanna find out how far along Benny Landa is with nanotechnology? Is this truly production inkjet’s coming out party and, if so, where does it go from here? Digital finishing, workflow/MIS, 3D printing, industrial printing, Web-to-print, variable data, printed electronics, integrated marketing tools … there’s plenty to get excited about. That doesn’t even factor in toner-based digital or even offset printing advancements .

Before you get too worked up as you and/or one of your co-workers prepare to board that Lufthansa flight, we’ve got a handful of industry know-it-alls who can provide a tad more guidance to get the most out of your Düsseldorf experience. So sit back, crack open a Pilsner to set the mood, and take a deep gulp of printing wonderland.

The Road to Greater Efficiency

“To me,” says Marco Boer, VP of Hanover, Mass.-based IT Strategies and conference chair of the recently held Inkjet Summit, “the overarching trend is not inkjet, toner or package printing — those are easy things to say — it’s the relentless march to help print providers become more efficient.”

By the same token, Boer adds, this efficiency quest invariably brings in all the functions surrounding the output devices, calling for them to become more efficient as well. That prompts investment requirements in software, workflow, color management and finishing, to name a few.

“If you don’t become more efficient, you get left behind,” he points out. “If you want to be in business for the next 10 to 20 years, you have to go forward. Patch jobs will only be effective for a few years … until you shut down.”

David Zwang, principal of consultancy firm Zwang & Co. in Danbury, Conn. — and a five-decade veteran of the printing industry — has been attending drupa since around the Reagan administration. He’s attended enough exhibitions to know that you need to wear sneakers ... and keep your eyes open for cut-sheet inkjet’s mindshare growth.

Zwang says that commercial printers, who are accustomed to operating sheetfed devices, will really want to check out all of the new cut-sheet inkjet presses that will be on display. “You have Heidelberg showing sheetfed inkjet for the first time with its Primefire 106. Fujifilm, very quietly, has made a splash with the J Press 720S. They re-released it in November of last year and now it’s selling like hotcakes,” he notes.

“Canon has already successfully launched the Océ VarioPrint i300 with multiple installs and Xerox is now getting into the inkjet game with the launch of its Brenva HD. Commercial printers want to know how to support variable data and short runs, and do it cost-effectively.”

John Zarwan, managing partner of J Zarwan Partners in Charlottetown, Prince Edward Island, Canada, is equally bullish on the cut-sheet production inkjet printing front. He points out that Delphax has enjoyed some success with its elan, which incorporates Memjet Waterfall printhead technology. Komori and Konica Minolta have also teamed up for the KM-1/IS29 cut-sheet UV inkjet press. And, of course, there’s Landa’s S10 nanographic presses, which will be offered in a perfecting version for commercial printing applications.

“Clearly, we’re really at an industry inflection point in terms of the shift of production,” Zarwan states. “While offset [for commercial] will remain the dominant mode of production for a long time, digital will finally break out of its niche. Increasingly, equipment sales — and therefore R&D, innovation and breakthrough products — will continue to move toward digital at an accelerating pace.”

Toner-based digital printing doesn’t receive as much fanfare, and Boer believes there are plenty of compelling offerings in the light production space from the likes of Ricoh, Canon and Konica Minolta, products that are churning out offset-level print quality. On the software front, Boer recommends keeping an eye on automation tools, particularly those in relation to color management.

“Software plays a big role,” Boer says. “MIS software is greatly undervalued. A lot of people try to cobble together their own MIS software. At the end of the day, you need to have [automated] systems in place because you can’t keep all of these orders in your head anymore. Printers are just processing too many orders these days, and they’re smaller and smaller in size.”

Wide-format digital printing is an opportunity knocking on printer doors, Boer believes, because it offers above-average margins from the commercial printing standpoint. Plus, he says, much of the margin can be added in the conversion end.

Digital finishing and embellishments are certain to command plenty of attention at drupa 2016, according to Zwang. He finds Landa’s Nano-Metallography foiling substitution quite impressive and notes there will be ample digital diecutting offerings being displayed. Automation and integration middleware tools enable users to pull everything together.

“Digital brings a lot of new opportunities to print service providers, and those opportunities require different infrastructures and different ways to be able to integrate existing and future tools and processes,” according to Zwang.

One development to keep an eye on is the proliferation of Chinese exhibitors, he says. “From the exhibitor list, it looks to be absolutely dominant. Chinese companies had a strong presence at drupa 2012, but they didn’t really have much to offer. Will that change?”

From the “hidden gems” department, Boer advises to keep an eye on solutions shown in some of the smaller booths. This is where printers can learn about interesting, obscure or esoteric applications that slip through the cracks, but are waiting to be leveraged. One example is inkjet printing on 3D objects, which very well could find a taker from the likes of Unilever, Nestlé or Procter & Gamble.

“There’s always something really interesting at drupa that’s the seed of something that can be really big,” Boer remarks.

Then there’s actual 3D printing, of which Zwang is a big fan — though not necessarily from the standpoint of print providers earning a living through it. Rather, it’s the pervasiveness of inkjet manufacturing and the possibilities offered in doing microbial work, neuroscience and other potentially earth-shattering applications. Though not as practical in a day-to-day sense, he feels it’s nonetheless amazing.

So, are there any final words of advice for neophyte showgoers? Zwang’s aforementioned comfortable sneakers will save the feet. Boer suggests packing a snack, as hall walkers trying to wander through all 19 halls are notorious for forgetting to eat. And Zarwan rejects the notion of “seeing everything,” as it’s not going to happen.

In order to cover the show most effectively, Zarwan compiled three lists: one by alpha, another by product category and a third by hall. That enables him to check the most names off of his wish list.

Finally, view the exhibition as an amusement park to be enjoyed, rather than a mountain peak to be scaled. After all, it’s springtime and white asparagus [Spargel] season in Düsseldorf … what could be better? PI