Printers live by their deadlines and, for that reason, they take few things as seriously. No printer would slip a delivery date out of inertia or carelessness - there’d be too much at stake for the long-term good of the business.

Yet, the deadline that many owners of printing companies can’t bring themselves to confront is the one attached to what Scott Vaughn, CEO of The Standard Group in Reading, Pa., calls “the largest monetized event of their careers.” That would be planning for succession: the orderly transfer of ownership to new principals under whose qualified leadership the business will be able to go forward without the owner of the enterprise - in many cases also its founder - in charge.

Because so many printing and packaging companies are closely held, “succession” traditionally has meant a generational handoff of proprietorship. But if this used to be the norm in the industry, it isn’t any longer, according to Peter Schaefer of the investment banking consultancy New Direction Partners (NDP).

Face Facts, and Act on Them 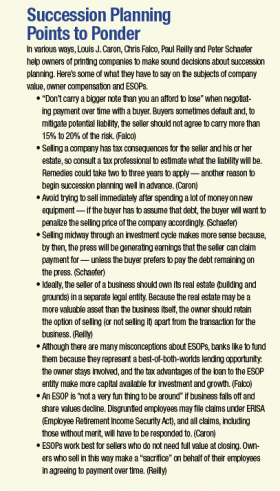 To succeed in any of these scenarios, Schaefer emphasizes, “you have to plan ahead:” it is a process that takes longer than most owners may realize and often requires more frankness than they may be used to, focusing on their track records as executive managers.

It isn’t that printing company owners are poorer at succession planning than owners of other kinds of small- and medium-sized businesses. Louis J. Caron, president and CEO of Printing Industries Association of Southern California (PIASC), says that among his members, owners in their late 50s and older understand the urgency and are doing what they can to prepare their companies for life after them.

It’s just that the nature of their jobs tends to get in the way. Chris M. Falco, CPA, founding partner of the financial advisory services firm Falco Sult, notes that while self-made owners like to immerse themselves in building revenue and business value, they’re not as attuned to devising an exit strategy: the graceful departure that succession planning makes possible. Ideally, says Falco, that process ought to be part of the entrepreneurial strategy from day one of the launch of the company.

If it isn’t it’s because, in many instances, leaders of businesses of all types and sizes aren’t looking far enough ahead. When the Stanford Graduate School of Business and partners surveyed executives and board members at 20 companies about succession in 2013, it found that nearly half (46%) of them were not grooming a specific executive to succeed the current CEO.

Another question was, “How many candidates from the internal talent pool are ‘ready now’ to immediately assume the CEO position (i.e., you could name them tomorrow if required)?” In response to this, 61% could name only one candidate or nobody at all.

“These findings are surprising, given the importance that strong leadership has on the long-term performance of organizations,” commented Stanford Prof. David Larcker. “Research shows that companies with sound succession plans tend to do better.”

Awareness Grows - Up to a Point

As printing company owners grow older, their options for succession may become less numerous, especially in light of the turbulence the industry has seen in recent years. Schaefer notes that many retirement-age owners who were ready to sell when the industry slid into recession in 2009 are still waiting for the chance. Caron says that the PIASC region, with its 800 member firms, has “an oversupply of companies looking to be acquired,” but relatively few printing businesses large enough to do acquisitions on a major scale.

For planning purposes, the time needed to prepare a company for sale or another form of succession - sometimes a period of years - has to be taken into account along with the age of the selling owner. According to data cited in the Goldman Sachs report, “The State of Small Business in America 2016,” half (51%) of small firms are owned by people over age 50. A glance around any gathering of printers confirms how prevalent this demographic is in the industry and how unmistakably the succession clock is ticking for many members of it.

Falco, who says that the lead time for effecting a succession can be as long as five years, believes owners wishing to sell should prioritize developing their management teams - the people a new owner will count on having to keep the company profitable.

Questions about the capability of the management team will be among the first a prospective buyer will ask, according to Falco, who notes that it doesn’t matter whether the team members are part of the family or not. What counts is their being able to think and act entrepreneurially enough to assure that “you don’t have to be the focal point” of the transition.

Caron says it’s urgent to ask, “Is your sales force the owner?” If the owner is doing most or all of the selling, the challenge becomes keeping those relationships intact while the deal is being closed and then after the person who nurtured them has moved on. This is especially critical, he points out, in transactions where what the new owner wants to acquire isn’t plant, personnel and equipment, but “a solid book of business that blends with their markets.”

NDP’s Paul Reilly has an admonition for owners who have become perhaps too central to the well-being of the businesses they created.

“If you haven’t replaced yourself as the CEO, and if you’re the person solely responsible for the success of your company, it will be very difficult for a buyer to say, ‘I want to buy this company, and you can go to the beach.’ You can’t go to the beach.”

If a replacement CEO can be found among next-generation family members, adds Reilly, that’s fine; but if none of them is qualified to grasp the reins, then the owner must commit to the time and expense of recruiting and training an outsider who can. Vaughn, of The Standard Group, who has transferred ownership of the company to his employees in an ESOP (see article "A Tale of Two ESOPs"), is so determined to foster leadership skills in the people who work for him that he regularly reminds them, “your job is to make me irrelevant.”

After cementing the management structure comes getting the financial house in order. Caron says that if succession is to take place as the result of a sale, the owner has to “package that company with all the bows on it” so that it will be as financially attractive to prospective buyers as possible. This means reducing debt, trimming excess staffing and eliminating any “fluff in the numbers.” Now is the time for the owner to view the business “through the eyes of the acquirer,” Caron advises.

A set of initials to remember, says Reilly, is EBITDA (earnings before interest, tax, depreciation and amortization), a figure that is multiplied to determine selling price in certain kinds of transactions. EBITDA increases when debt falls and sales rise; in other words, when the company becomes more profitable. “That’s always a good time to sell,” Schaefer agrees, “when you’re on an upward trend in profit and revenue growth, because that’s where you get the higher multiples.”

However it is accomplished, succession is about perpetuating enterprises that deserve to go on operating and may still have some of their best years ahead of them. Starting the planning conversation “early in life” is the way to build a foundation for an outcome that benefits everyone concerned, advises Caron.

For printers like Vaughn, however, succession is far from being only about the material rewards. The company his family acquired in the 1980s traces its origins to 1895, and “I refuse to be the generation that lets that tradition die,” he declares. With proper planning, no owner needs to fear being the one who will have to turn the lights out for the final time.