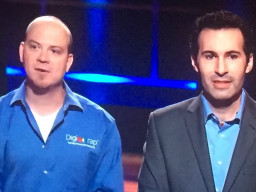 GLENDALE HEIGHTS, Ill. — December 13, 2016 — DigiWrap co-founders Brad Boskovic and Charlie Williams swam with the sharks during the popular "Shark Tank" television series, which aired on ABC last Friday night as part of a holiday-themed episode, and walked away with a deal with the shark some holiday viewers might call Scrooge. After all, Kevin O'Leary, who goes by the moniker "Mr. Wonderful," didn't earn that nickname by accident, especially when he often tells contestants "you're dead to me" when they reject his offers.

But the DigiWrap founders, who spun off their customized, digitally-printed tissue wrap and gift bag business from Lingraph Services in 2014, were able to negotiate back and forth with O'Leary before ultimately reaching a deal. They came on the show seeking a $150,000 investment for a 10% stake in their company, but O'Leary originally only offered $150,000 for a 50% stake and —perhaps as a ploy — described it as a "small niche, greasy chicken deal." Following back-and-forth banter, the two sides eventually struck a deal at 20% equity for the $150,000, plus royalty payments to O'Leary of 5 cents per tissue paper order, and 10 cents per bag order until a cap of $450,000. 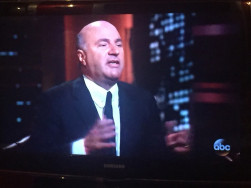 DigiWrap rents space within the Lingraph facility — a commercial printing operation that was founded in 1985 by Brad's parents Mike and Linda Boskovic — and outputs the personalized tissue paper and gift bags on its two HP Indigo 5500 digital presses. An online-only business, the tissue paper offering (minimum order: 25 sheets) is geared toward corporate and retail customers seeking personalized tissue paper with corporate brands, logos, product shots or even full-color photos to use as a personalized touch for gifts, giveaways and promotions. The custom-printed bags are produced by DigiWrap and sold through a wholesale agreement with Zazzle.com.

Turn times for orders are typically 3 to 7 business days. The co-founders told the "Shark Tank" investors that DigiWrap generated sales of $350,000 last year, but is on track to reach the $500,000 mark in 2016. O'Leary was the only one to bite perhaps since he was the shark who knew the most about digital printing and was even a keynote speaker at the last Dscoop.

Williams told Printing Impressions that DigiWrap has patented the process for digitally printing and personalizing tissue paper, but they couldn't patent the bags, although he points out that the process to print them is proprietary. 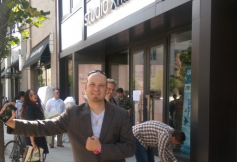 Charlie Williams displays his contestant wristband outside the building where the tryouts were held in Chicago.

Williams and Boskovic rented out a nearby off-track betting facility last Friday for family, friends and associates to view the episode they appeared in. But their appearance on the show almost never happened. Williams' mother-in-law saw a TV commercial about a June open casting call for "Shark Tank" in Chicago, and Williams and Boskovic decided to show up only the night before the open casting call. They printed their actual application on tissue paper and took a picture of Williams standing outside the casting call location wearing the contestant wristband he had been given by show organizers.

They then rushed to the office and designed a customized tissue paper based around that photo, according to Williams, to use for their one-minute product pitch scheduled for just a few hours later. They created both regular paper and tissue paper versions, knowing that the casting call judges would inquire why it was also printed on tissue paper. Once chosen, the episode in front of the actual sharks was filmed in September. 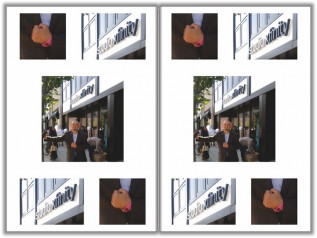 The DigiWrap partners rushed back to their shop to create personalized paper and tissue versions that incorporated the image on their HP Indigo press. 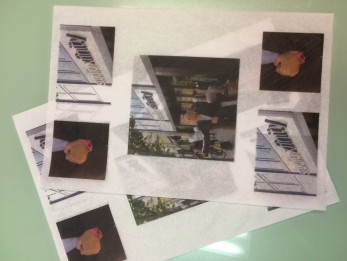 This provided a great prop to use for their one-minute product pitch.

"We wrote and rewrote several scripts for our pitch. We made sure we knew all of our numbers, concepts, our weaknesses and how we overcame them, analysis, breakdowns — then we redid it all and rewrote it again and again," Williams notes. "We prepped all this prep, but nothing can actually prepare you to swim with sharks."

Is B2-Format Digital Printing Right for You?