"Our team delivered another strong year of financial results—growing revenue for the sixth consecutive year and growing cash flow from operations for the seventh consecutive year," said Lee Schram, CEO of Deluxe. "Throughout 2015 we made substantial progress on our transformation and we further strengthened our marketing solutions and other services product offerings by aggressively expanding our focus and investments into the Financial Services segment where we added comprehensive data analytics and enhanced treasury management solutions and products."

He continued, "In addition, we added even more robust technologies for web-hosting customers and expanded our direct sales channels to expose more small businesses to our extensive assortment of marketing capabilities. Looking into 2016, we expect to continue our track record of growth in revenue, EPS and cash flow from operations and we expect that marketing solutions and other services will account for over one third of our total revenue." 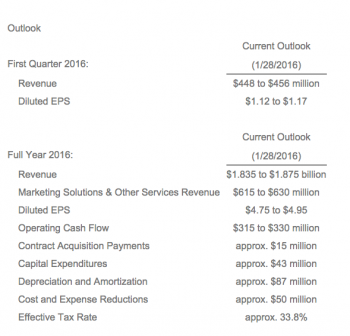 About Deluxe Corp.
Deluxe is a growth engine for small businesses and financial institutions. 4.5 million small business customers utilize Deluxe's service and product solutions, including website development and hosting, email marketing, social media, search engine optimization and logo design, in addition to our industry-leading checks and forms offerings. Deluxe serves approximately 5,100 financial institutions with a diverse portfolio of financial technology solutions that enable them to grow revenue and manage their customers’ throughout their lifecycle, including our best-in-class check program solutions. Deluxe is also a leading provider of checks and accessories sold directly to consumers.