"Our transformation strategy continues to deliver strong results as we again saw growth in revenue and earnings," says Lee Schram, CEO of Deluxe. "While at a macro level there are many events in the news — Brexit, the U.S. presidential election, debates on interest rate hikes and the overall health of the economy — our team continues to be squarely focused on executing our strategy to consistently grow by expanding our marketing solutions and other services offerings while stabilizing our core printed products. Looking ahead we believe we are well positioned as we enter the third quarter to grow 2016 revenue for a seventh consecutive year and continue to enhance shareholder value." 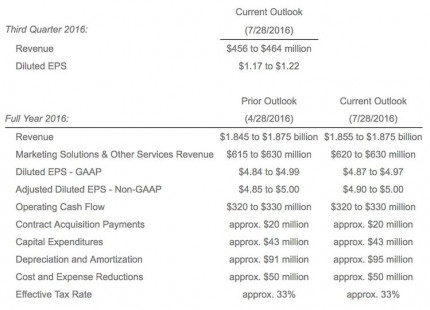 About Deluxe Corp.
Deluxe is a growth engine for small businesses and financial institutions. 4.5 million small business customers utilize Deluxe's service and product solutions, including website development and hosting, email marketing, social media, search engine optimization and logo design, in addition to our industry-leading checks and forms offerings. Deluxe serves approximately 5,100 financial institutions with a diverse portfolio of financial technology solutions that enable them to grow revenue and manage their customers throughout their lifecycle, including our best-in-class check program solutions. Deluxe is also a leading provider of checks and accessories sold directly to consumers.