Revenue exceeded the Company’s prior outlook driven by the Small Business Services segment and a strong performance from the Financial Services segment, primarily from the recent acquisition of FMCG Direct which was acquired in December 2016. GAAP Diluted EPS was at the high end of the range of the prior outlook, despite recognizing a $0.07 per share asset impairment charge during the quarter related to a business held for sale and adjusted diluted EPS exceeded the prior outlook due to strong operating performance in all segments. The Company exceeded the high end of the adjusted diluted EPS previous outlook by $0.08 per share due to higher than expected revenue and results from FMCG which drove $0.06 per share, a lower tax rate which drove $0.03 per share, higher revenue from each of the three segments which drove $0.02 per share and these were partially offset by a legal settlement and expenses in Financial Services of $0.03 per share.

“We delivered very strong first quarter results to start the year,” said Lee Schram, CEO of Deluxe. “Both revenue and adjusted diluted EPS exceeded our expectations and marketing solutions and other services grew 20 percent over the prior year and ended the quarter at over 35 percent of total revenue. We are pleased with early results from recent acquisitions and based on our strong overall performance in the quarter, we are slightly tightening our full year adjusted diluted earnings per share outlook. We continue to expect that we will deliver another strong year of revenue, earnings and operating cash flow growth.” 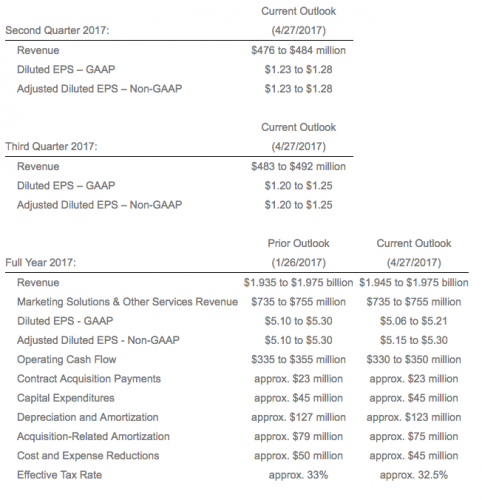