Revenue, diluted EPS and adjusted diluted EPS were all in-line with the prior outlook as provided by the Company on January 6, 2017.

“We had another successful year of growth in both our digital marketing services capabilities and financial results,” said Lee Schram, CEO of Deluxe. “Our team delivered a seventh consecutive year of increased revenue and an eighth consecutive year of increased cash flow from operations. We believe the strategic investments we made during the year in web services, data driven marketing solutions and treasury management solutions, put us well on track toward our goal of growing marketing solutions and other services to 40 percent of our revenue in 2018. Looking ahead, we believe this year we will further diversify our revenue base and once again grow our profitability and operating cash flow.”

First Quarter and Full Year 2017 Outlook: The first quarter 2017 earnings per share outlook includes approximately $0.07 per share of EPS dilution attributable to the FMCG Direct acquisition which closed on December 30, 2016. 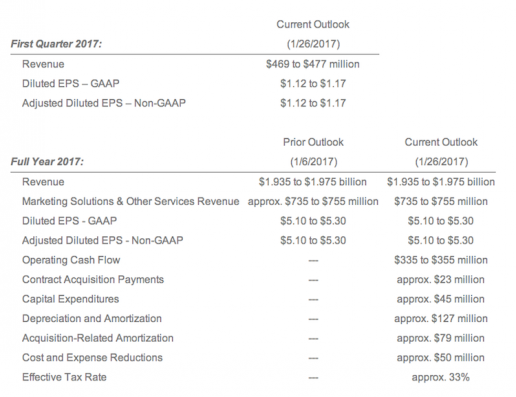