Both revenue and adjusted diluted EPS exceeded the high-end of the range in the prior outlook driven primarily by stronger operating results in the Financial Services segment. Results from the Small Business Services and Direct Checks segments were near the high end of expectations in the prior outlook. First quarter 2015 diluted EPS on a GAAP basis included a $0.12 per share charge related to the early redemption of the Company’s $200 million 2019 Senior Notes in March 2015.

"We delivered very strong first quarter results in spite of what appears to be an overall continued sluggish economy," says Lee Schram, CEO of Deluxe. "We continue to see growth in marketing solutions and other services which increased over 19% from last year and accounted for over 31% of total company revenue in the quarter. Our transformation to a marketing and financial technology services provider continues to make tremendous progress and we believe we are well positioned to deliver another year of strong revenue, earnings and cash flow growth." 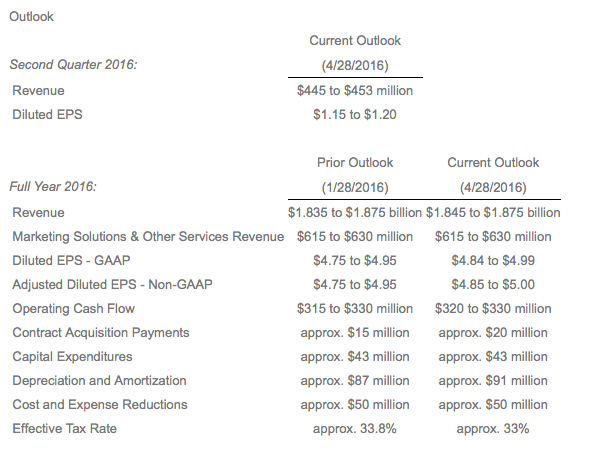 About Deluxe Corp.
Deluxe is a growth engine for small businesses and financial institutions. 4.5 million small business customers utilize Deluxe's service and product solutions, including website development and hosting, email marketing, social media, search engine optimization and logo design, in addition to its industry-leading checks and forms offerings. Deluxe serves approximately 5,100 financial institutions with a diverse portfolio of financial technology solutions that enable them to grow revenue and manage their customers throughout their lifecycle, including the best-in-class check program solutions. Deluxe is also a leading provider of checks and accessories sold directly to consumers.