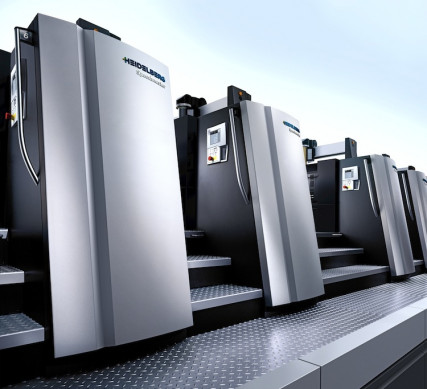 The Speedmaster XL 106-4P from Heidelberg.

KENNESAW, Ga. — March 29, 2017 — Columbus Productions located in Columbus, Ga., recently installed a Speedmaster XL 106-4P from Heidelberg. The new press replaces an older Speedmaster SM 102 and marks the company’s dedication to its cost-leadership initiative, which aims to reduce costs and put the company at the forefront of its competition.

“We’re anticipating significant improvements all around,” said Fred Braswell, Senior Director of Operations. “We estimate an 80% increase in capacity, a 90% reduction in changeover time as well as substantial decreases in downtime and makereadies, ultimately reducing overall costs.”

The Speedmaster XL 106 is the leading peak performance press in the 70 x 100 format with maximum production speeds of 18,000 sheets per hour. The XL 106 is the industry standard, outshining the competition in terms of productivity and efficiency. Users of the XL 106 often produce well over 50 million sheets per year, with the current record at 90 million impressions per year.

Braswell describes the purchase of the XL 106 as the second phase of Columbus Productions’ three part cost-leadership initiative. The first involved recent upgrades to its finishing department including multiple Stahlfolder TH 82s and a POLAR 137 high-speed cutting system.

“Our finishing department has been producing record volumes,” said Peter Muroski, Director of Operations. “Just last year, we produced over 400 million pieces in our finishing area and accomplished it while running 1 shift. We are positioned for growth.”

According to Muroski, work can now go direct-to-pallet (with the POLAR 137) and ship in bulk rather than packaging in cartons. “This falls directly in line with our initiatives of reducing expense while improving throughput.”

With a new workhorse at every stage of production, Columbus Productions is well on its way to achieving its business goals. For the Georgia-based company, the emphasis on cost effectiveness is not only for the benefit of the business, but also to afford savings to its entire client base.

“We’re looking at a 25-30% reduction in the total cost of the job,” said Braswell. “We’re confident in that because we push these machines to their limits, and that’s a testament to a good machine.”

Braswell explains that the investments provide predictable output across the board. “We know what we are going to get with these machines, which is top quality and high speeds,” said Braswell. “Because of this, our customers can get what they want, when they want it.”

END_OF_DOCUMENT_TOKEN_TO_BE_REPLACED
Happening Today
The Next Opportunities in Print