“The Fujifilm J Press 720S has transformed our business,” said Todd Meissner, president, Color Ink. “We’re taking jobs off of the 40 inch litho press as well as jobs from our wide format press. We are moving more jobs over to the J Press 720S because it makes good economic sense. The inkjet technology is unbelievable, it produces tremendous quality, and it’s a faster way to produce many of our jobs.”

Jim Meissner, Todd’s father, started Color Ink in 1984, as primarily a commercial printer. With the addition of Austin Meissner, Todd’s son, Color Ink is now a third-generation family owned and operated business, with 100,000 square feet within two buildings situated on suburban Milwaukee land that was once a family farm. The operation includes 75 full-time employees, along with an additional head count of up to 50 temporary employees, working up to three shifts a day, five days a week.

“My grandfather started the company with very humble roots,” says Austin Meissner, Sales and Sourcing Manager, Color Ink. “It certainly means a lot to me being third generation at Color Ink. Having the opportunity to work with my father is just a great experience for me.”

The Meissner’s research into an inkjet press that could fill their clients growing need for shorter runs and versioning culminated with a visit to Fujifilm’s Chicago Technology Center to experience the J Press 720S first-hand, including running a myriad of tests to prove that that the technology could meet their needs.

“When we looked at other offerings before committing to the J Press 720S, we felt there wasn’t anything that was even close, in our opinion, to the cost of ownership, quality level, and uptime. With the quality we are seeing on Fujifilm’s J Press 720S, it’s better than litho; it’s revolutionary, and just a better way to print,” said Todd Meissner. 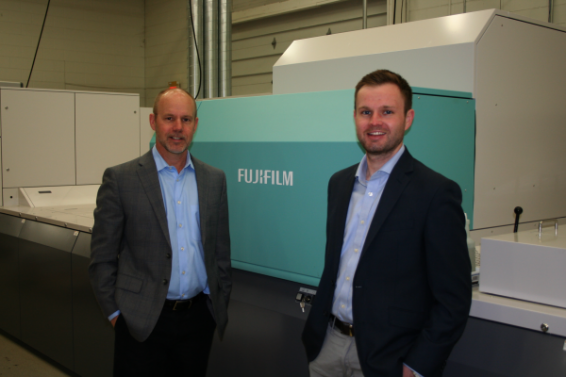 Todd Meissner, left, president, Color Ink, proudly stands next to the J Press 720S, along with his son, Austin, Sales and Sourcing Manager, at their Sussex, Wisc. facility.

Color consistency and tight project turnarounds are always on the minds of print service providers, and with the J Press 720S, they are essentially a non-issue.“On the J Press 720S the color consistency is phenomenal,” says Mark Linski, J Press 720S operator, Color Ink. “From sheet one to the last sheet, there is no variance in color. I don’t even have to worry about consistency. And the ease of use goes from maintenance all the way through the ease of the interface. I basically load paper and print all day long; it just keeps running and running and running.”

Printing on-demand and in shorter runs is a key element for Color Ink since more and more print buyers are specifying shorter runs and versioning.

“For a lot of the retailers, their store accounts across the country may only be 1,000 stores, or maybe a couple hundred stores,” said Todd Meissner. “When we are producing graphics for each store, we’re talking about run lengths of maybe 200 to 1,000 units, short runs. That’s why the J Press 720S is such a great fit for us. We’re going from one job to another without stopping. It’s the same paper, it’s the same sheet size, but we’re literally printing 10 of this, 20 of this, 500 of that, nonstop, on the fly. Versioning has been just a great tool for us on the J Press 720S, whereas if you think about what you’d have to do on a litho press with plate changes, it’s a big deal. We are also eliminating the need for customers to warehouse finished product, and literally print on-demand for not that much of a higher price per unit, compared to ordering 10,000 or 20,000 units at a time. The Fujifilm J Press 720S is outstanding.”

Concludes Todd Meissner, “Fujifilm always seems to come forward with very relevant solutions for our business, and our experience with their equipment, consumables, and people have been instrumental in transforming our business.”