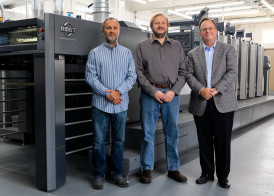 For Roman Majewski, the founder of Chicago’s Polpress, printing has been more than a way to earn a living, going back to his early days in the Chicago printing trades where his passion for high quality printing was fostered by men twice his age. Polpress is known throughout the city for the craftsman’s approach that is taken with each print job they produce. Investing in a better way to produce his demanding client’s projects has been Roman’s goal for many years, but until the perfect mix of technology, footprint and value became a reality, this investment had to wait.

"Derek Gordon from Graphco told us about the RMGT 9 Series press a few years ago and I’ve been interested in this press and LED-UV ever since,” says Roman Majewski. “We went to Push Solutions and some other RMGT houses and all we heard was great news. I could tell the technology and build quality of the press were solid, and LED-UV curing was ready for prime time, so we pulled the trigger.” The new press was installed in September of 2018 and it’s no coincidence that Polpress grew by over 15% by the end of the year. “This press just runs and runs,” notes Majewski.

Polpress’s new RMGT 940ST-5+CC+LED-UV five-color press features a full suite of industry leading technology like RMGT’s SMART Insta.Color make-ready technology, FULL RPC fully automatic plate-changing, dual coating capability to produce both Aqueous and LED-UV and even a color console interfaced with a Wi-Fi tablet. “Our family has two Tesla cars and I do my photography with a Leica so I’ve always invested in the best technology. The build quality and features on this new RMGT press have really impressed me,” Majewski comments.  “We want to offer the best print quality and with LED-UV and all this great automation we can give our customers the best with a lot less effort.”

In addition to the productivity gains, part of their success is due to using LED-UV inks, which allow Polpress to print on nearly any stock. “It has instant curing, and the idea of just running the job, taking it off the press and putting it on the cutter is just amazing. It’s like having a huge digital press, basically, a huge, full-sized digital press,” Majewski said.

As one of the only LED-UV printers in the city of Chicago, Polpress is also capitalizing on the environmental benefits to the RMGT 9 Series. Since it emits no VOCs and doesn’t require any sprays to keep the inks open overnight, nor any powders to help with drying, the work coming off the press is compliant with even the most stringent environmental regulations — including California’s Prop 65. “We don’t have those laws in Illinois yet, but I am sure they will be coming,” Majewski noted. And when it does, Polpress will be well positioned to capture even more of the work in the Greater Chicago area and beyond.

“We didn’t really look at any other presses,” said Majewski. “No one else really had a good option in this particular sheet size.” He further noted that once they got the press installed and really started using the automation and LED-UV curing, he knew there was no going back.

With the advanced features the RMGT 9 Series brings to the shop. Majewski found that they could run more work than they ever could before on their old equipment. “The speed and fast make ready make it a speed demon,” he said. During the busy election season last fall, for example, he notes that they had so much work they had the press going 24/7, instead of the usual 24/5.5, but never missed a deadline and was able to open up new markets at the same time.

The new RMGT 9 Series press joined a Mitsubishi Diamond Series 40” press that was installed years ago so Polpress is now an all RMGT shop offering their clients everything from high quality brochures, event booklets, community publications, direct mail advertising and presentation materials. Derek Gordon, Regional Manager for Graphco adds, “Roman and I have known each other for over 25 years and I’ve always admired his knowledge of the printing trade. Partnering with Polpress on this investment right in my hometown is a real feather in Graphco’s cap.”

Energy conservation and low carbon emissions are important enough to Polpress that they have 3 zero emissions vehicles and 2 charging stations outside of their building so employees can charge their cars while they work. “This new RMGT press uses very little power and the LED-UV inks are VOC free, so we are doing our part for the environment. And we think our print quality is now the best in the city.” While the new press is equipped to do Aqueous coating with the high gloss and excellent rub resistance of LED-UV inks means the highest energy user (IR/Hot Air Dryer) in the pressroom will only run for a few jobs per month.