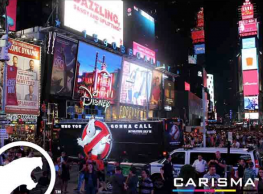 Using its Massivit 1800 3D Printer, Carisma produced ten 14-ft. high 3D printed graphics that were mounted and illuminated on buses throughout America ahead of the "Ghostbusters" release.

The promotional campaign saw Carisma produce the ten, 14-ft. (4.27 m) 3D printed images of the iconic ‘No-Ghost’ sign, which serves as the logo for the movie.

The 10 models were 3D printed in robust Dimengel material over 10 days before being affixed as illuminated 3D printed wraps onto a fleet of double-decker buses and used nationwide during a month-long campaign.

Who You Gonna Call?
According to Moshe Gil, founder and CEO of Carisma, the entertainment giant called upon Carisma’s expertise to produce a visually-captivating promotional campaign that would turn heads among the public during the movie’s release.

“When it comes to creating stunning projects with the attention-grabbing wow factor guaranteed to create a stir, then our Massivit 1800 3D Printer is our method of choice,” says Gil. “Visually-appealing bus wraps are not a new application area for companies like ours, but the capability to offer 3D printed versions takes that application to new creative frontiers.”

According to Gil, as with many sign and display projects undertaken by the company, his team had to work to a fairly short production time-frame, but thanks to the attributes of the Massivit 1800 3D Printer, were able to complete and install the job on time.

“Fortunately the combination of the printer’s high speed and robust material enabled us to rapidly output 10 identical models that also boasted the durability to withstand a month outdoors on the road,” he explains.

“The impact of the bus wraps was incredible, particularly at night when the public were drawn into the eerie glow,” he adds. “Most importantly, our client was delighted that the project achieved the objective of producing a huge buzz ahead the movie’s launch.” 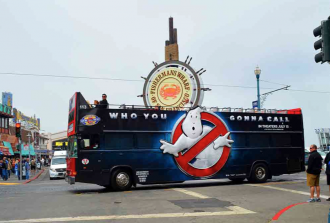 Sony Pictures commissioned Carisma to produce a visually-captivating promotional campaign that would turn heads among the public during the movie’s release.

“Sony Pictures was so blown-away by the attention generated around 'The Angry Birds Movie' campaign that it sought something similar for 'Ghostbusters,'" explains Gil. “As a business owner, retaining clients by undertaking repeat work is critical and this is a clear example of how the Massivit 3D Printer enables us to do exactly that.”

Adding a New Dimension
Previously, Carisma produced large-format applications using mixed substrates including cut illuminated acrylic, PVC boards and lenticular lenses. According to Gil, the Massivit 1800 3D Printer has added a new dimension to his business and has significantly enhanced its service capabilities. The company can now offer game-changing, engaging 3D elements with traditional 2D applications to elevate the creative possibilities for its vast client portfolio. These clients include the likes of Macy’s, Disney and Samsung.

“Before the Massivit 1800 3D Printer was launched there was a substantial gap in the market for a solution with the capability to produce large-scale models with a super-fast turnaround time,” he explains. “As an innovative company we always think outside the box and this is what led us to Massivit 3D. The Massivit 1800 3D Printer delivers a new level of creativity and extends our design capabilities further than ever before.”

Lilach Sapir, VP, marketing and business development, Massivit 3D concludes, “Carisma is a prime example of a printing house active in the visual communication and large-format segments adopting 3D printing technology to enhance its competitive edge and build its client base. 3D printing enables such companies to quickly and cost-effectively produce visually-striking campaigns that standout from the crowd.”

Watch this video to see the public’s reaction to the 3D printed bus wraps.

About Massivit 3D
Massivit 3D Printing Technologies is a leading provider of large format 3D printing solutions. It was established by a group of experienced industry veterans from leading digital printing companies, who decided to make a statement in the global 3D printing industry. The Massivit system, the largest, fastest and most advanced large-format 3D printing solution, based on proprietary GDP (Gel Dispensing Printing) technology — a solution that ignites a market explosion in the use of large 3D objects, through a variety of markets worldwide.

Hub Labels Sees Influx of New Jobs in Response to

The Need to Invest in Production Inkjet Technology