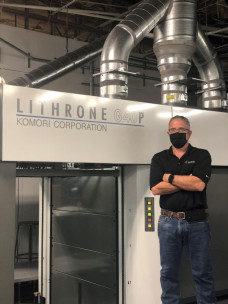 Founded in 1929 and currently employing approximately 90 people, Capital Printing is one of the largest commercial print shops in Austin, serving clients from the central Texas region and several nationwide accounts. President and majority owner, Michael Martin, acquired the company approximately three years ago. Clients are drawn from a variety of market segments, including government, non-profit, education, publishing and retail and typical jobs include newsletters, books and a range of other applications. The company provides offset and digital printing — and hybrid print production — as well as mailing and fulfillment services. In addition to its main facility, Capital has a second location in Austin that specializes in wide-format printing.

“The sales opportunities in the past three years have exceeded my expectations with more opportunity to grow than I thought there would be,” said Martin. “It created a good problem to have. I decided that investing in new equipment made sense now because of the increased capacity and productivity gains.”

Capital had been a Komori shop and Martin decided to stay with the manufacturer, partly because the staff was familiar with the equipment and had positive relationships with Komori representatives and technicians, but also because of the advanced automation and production speeds of Komori’s latest offset presses. The new GL840P runs 25% faster than the press it replaced and, Martin noted, “The overwhelming advantage of LED is the fact that the sheets come off the press dry. That was another huge productivity gain.” Capital Printing is confident the new press will be a key component in its continuing growth.

“We are looking forward to supporting Capital Printing’s growth with both Komori presses, which we know will exceed their requirements and meet customer demands for quick turnaround,” said Mark Milbourn, executive vice president, Komori America. “The GL840P is designed to provide more options and expanded capabilities for every type of print requirement.”