A ribbon-cutting ceremony was held during Canon Expo 2015 in New York.

NEW YORK—September 11, 2015—Canon Expo 2015 took over the Jacob K. Javits Center here for three days this week, showcasing cutting-edge (and futuristic) Canon technology for an expected crowd of more than 10,000 by the time it wraps up today. 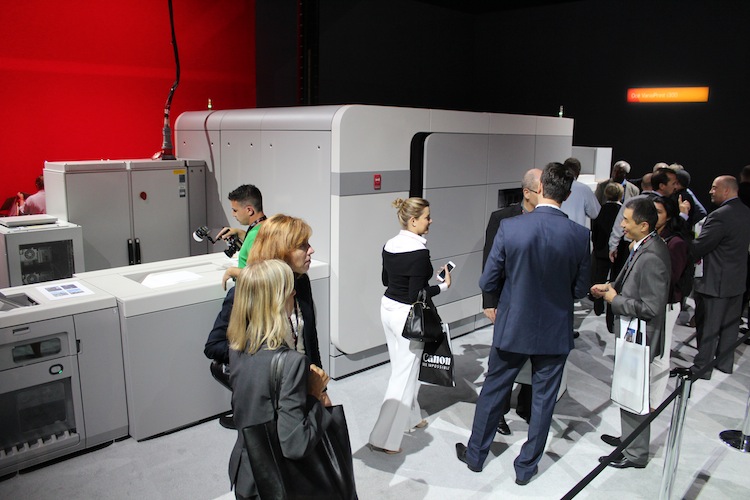 Crowds gathered around to see the Océ VarioPrint i300 cutsheet inkjet printer.

Taking place every five years, Canon Expo packed a diverse array of Canon technology into more than 100,000 square feet of exhibition space. The invitation-only event will make two more stops, in Paris and Tokyo this year, then move to Shanghai in 2016.

Fujio Mitarai, chairman and CEO of Canon Inc., helped cut the ribbon to open Canon Expo on Wednesday, then gave an inspiring keynote that evening for a packed auditorium. He recalled his early days working in New York (when no one had heard of Canon), then laid out his vision of Canon's future from a global perspective.

The expo itself featured a fascinating array of Canon technology—from medical imaging equipment to high-end motion picture cameras. The display of 8K screens was jaw-dropping in the crisp detail of the images. Also memorable was the indoor Yankees baseball stadium where a live game was being played. Canon cameras were scattered throughout the dugout and up in the stands, where attendees were free to use them to capture the action.

But it was the sight of the Océ VarioPrint i300 cutsheet inkjet printer that most excited the graphic arts crowd. It was printing color pages at the expo, which came out dry, flat and ready for distribution. Able to print up to 294 letter images per minute and handle paper sizes up to 13.9x19.7˝, the inkjet press can produce heavy production volumes of up to 10 million pages per month. Canon expects the VarioPrint i300 to accelerate the migration of offset-printed pages to digital. 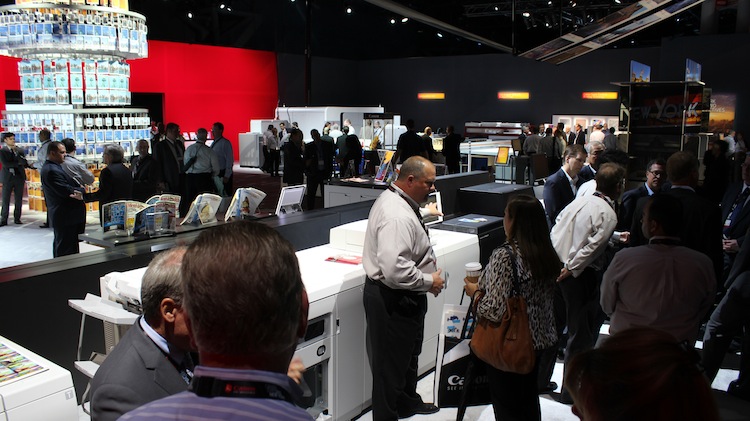 Thick crowds always surrounded the new imagePRESS C10000VP, as well. It boasts a new toner with a smoother surface to enable finer reproduction and minimize scratching. The model on display featured an in-line GBC scoring/creasing device, which impressed many of those checking out the machine.

Canon Expo 2015 featured so many intriguing sights and sounds, it's hard to capture it all in words. Here's a video to give you a better idea of what it was like:

END_OF_DOCUMENT_TOKEN_TO_BE_REPLACED
Happening Today
The Next Opportunities in Print