Study Reveals How Bestsellers Use Cover Decoration to Drive Sales

Bestsellers on The New York Times Mass Market Fiction list are four times as likely to use cover decoration as compared with all mass market books. This is the finding of a recent BE Printers Inc. study on the use of foil and emboss effects. 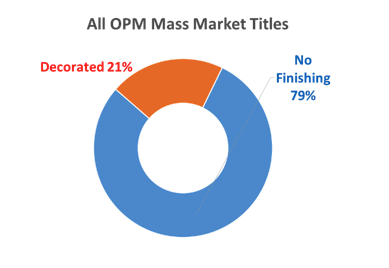 The share of decorated titles on the Best Seller Lists is roughly the inverse of the number of all mass market titles that are decorated. Why? Obviously, many best sellers are from renowned authors who insist on extensive marketing of their books. Foil stamping does not guarantee a best seller but not decorating your book makes it much less likely that the book will be successful, perhaps because it is not noticed and is lost in the crowd.

Bowker data shows that 304,912 traditional books were published in 2013. Barnes and Noble’s current 10K reports that there are between 22,000 and 163,000 separate titles in a Barnes and Noble bookstore. With this number of skus, how does a consumer find a given title? What attracts their attention?

The science behind the decisions
There is insight from the eye tracking firm, Eye Faster, who find that consumers do not usually look for products in a sequential manner. They browse towards the center of a display, where their eye is distracted. As a consumer can only buy a book that they notice, the following model is instructive:

This model is quite relevant for the 26 percent of book purchases in a bookstore which are impulse buys. (Bowker 2010 study). As Eye Faster indicates, “The differentiating element of an impulse purchase versus a planned purchase is an outside stimulus that catches the shopper’s attention and draws them away from the planned shopping path.” Cover decoration is all about how to get a product noticed. 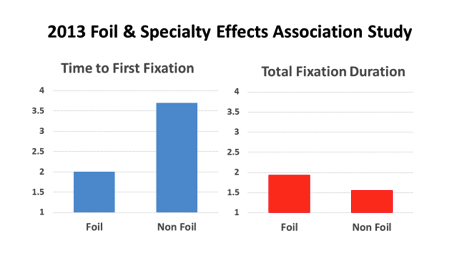 Historically, foil stamping and embossing were used to enhance the perceived quality and perceived value of decorated products. They increase product visibility, creating “shelf pop.” A 2013 Study commissioned by the Foil and Specialty Effects Association measured 265 individuals through eye tracking. They found that the time to first fixation, the time it takes to find a product of interest once in the product category was significantly greater for foil versus non foil products. The ability to attract attention had a strong impact on a consumer’s purchase decision.

Another earlier FSEA commissioned study on seven consumer packaged good product categories confirmed that brand identity was strengthened through foil stamping as compared with the same product in a non-foil stamped package. In 1,500 shopper interviews, there was a consistent positive impact on aesthetic appeal and brand image. This led to increased purchase interest in 70 percent of the cases. In the higher priced products, there was also an increase in the price the consumer expected to pay, reflecting an increased perception of value.

What does this mean in the real world?
Associated Wholesale Grocers added gold foil stamping to its olive oil brand. They experienced a 30 percent increase in velocity for the Best Choice Private Brand, and a retention of 10-15 percent thereafter. As a consequence, AWG relabeled other consumer packaging products using foil stamping.

The dollars and cents
Finally, is decorating a book financially feasible? The incremental cost of foil stamping is clearly impacted by run lengths as the die manufacturing cost does increase the initial make-ready. Nevertheless, a review of trailing OPM results showed that the average incremental cost for foil stamping and embossing in 2014-15 was $0.046 per cover versus an undecorated book. This is a fraction of the $7.68 average mass market price as reported by the Library Network, but it helps ensure that the book is noticed on the rack.

Sean Twomey is a vice president with Dynamic Graphic Finishing Services, the finishing division of BE Printers America.

One a Day to Win the Day
Comments
PRINTING United Expo