Best-in-Class Innovator: Direct Edge Media Has 'Got It Covered'

The stories of six printing companies profiled for our Innovators series (the first of which is profiled below) suggest that when we speak in practical terms about a relentless drive for improved performance, we come nearer to the heart of what “innovation” in the printing business really means.

All the customer could tell Ryan Brueckner and Ryan Clark was that the job had to be done: the client hadn’t a clue about how to pull it off. The co-founders of Direct Edge Media, in Anaheim, Calif., were given just eight weeks from initial concept to print and distribute banners, posters, flyers and coupons in 2,000 different versions for a chain-wide promotion that centered upon 400 “host” stores.

Some of the items had to go to supporting stores within a three-mile radius of the host stores, and none of the material for any supporting store could point to more than one host - a logistical challenge that made the printing look almost easy by comparison.

“You couldn’t do that out of an Excel file,” quips Brueckner. Instead, the partners sat down with their staff of three full-time programmers and worked out the tortuous what-goes-where
permutations, spending the first two weeks of the project on that task alone.

This kind of high-level problem solving “is really what we do” and chiefly what distinguishes Direct Edge Media from its competition, according to Clark. He and Brueckner have built the business this way since starting it as 20-something-year-olds with a shared background in photo processing and enlargement. 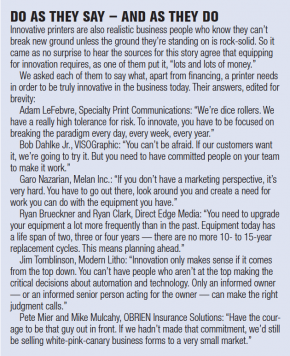 Look for these companies profiled in our series of Innovator articles. Click to enlarge.

Both turned 40 this year, and their capability now spans the full gamut of digital, wide-format digital and offset printing. “Whatever it is,” Brueckner says, “we’ve got it covered.”

But to clients, Clark notes, “the equipment isn’t important.” It’s the quality of what comes off the devices that is the paramount requirement. In the job described earlier, the partners assured top quality by rigorously color-managing the output of three production inkjet systems from Fujifilm: an Onset X3 wide-format flatbed UV printer, a Uvistar Pro8 roll-to-roll printer and a J Press 720S sheetfed press.

With the help of some specially formulated inks, variation across the devices was within a tight ∆4 tolerance. The Onset X3 also was the key platform in a lenticular printing project that was seen “in every mall in America,” according to Clark.

Looking ahead, the partners aspire to be operating out of more than the three locations (Anaheim and Orange, Calif., and Denver) they currently occupy. The goal, they say, is being able “to cover all of North America in a day” with same-day order/print/ship services. One of its customers is currently seeking that level of support, Clark reveals.