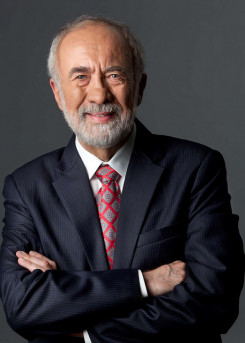 AMHERST N.Y. and ALEXANDRIA, Va. - August 7, 2018 - Idealliance and Printing Industries Alliance Foundations are pleased to announce that the 2018 Franklin Luminaire Committee has selected Benny Landa, visionary inventor, entrepreneur, philanthropist, and “Father of Commercial Digital Printing,” as the recipient of the 2018 Franklin Award for Distinguished Service - the highest honor given an individual by the graphic communications community.

The coveted award has been presented for more than 60 years to renowned leaders in the military, politics, business, journalism, and communications, for their outstanding achievements and contributions to American society. The award, named for Benjamin Franklin, a printer by trade, will be presented to Landa at the annual Franklin Luminaire Awards on Wednesday, Oct. 17, 2018 (5:30 p.m. - 10 p.m.) at The Lighthouse at Chelsea Piers in New York City. The gala is jointly presented by the Print Drives America Foundation and the Idealliance Foundation. Event sponsorships are available and are offered at early bird rates through August 31.

A pioneer of digital printing at Indigo, Landa continued his visionary pathway as Founder, Chairman, and Chief Executive Officer of the Landa Group - pioneering futuristic nanotechnology applications in the fields of imaging, energy, and health. His vision for the future also includes investment in promising Israeli technologies and philanthropic activities that enable underprivileged youth to gain access to higher education. Landa has a portfolio of over 800 patents worldwide and is the printing industry’s and Israel's most prolific inventor. Recipient of numerous honors and awards, including the imaging industry's prestigious Edwin H. Land medal, he has also received numerous lifetime achievement awards and honorary doctorates.

“We are delighted to salute Mr. Landa with this prestigious honor and acknowledge his achievements in front of more than 300 prominent CEOs and senior executives from the printing, publishing, digital, advertising, and graphic communications community,” says Franklin Luminaire Committee Co-Chair Steve Drew, Sales Executive-Magazine Group at LSC Communications. “The exciting evening carries on a long-standing tradition of offering close networking opportunities with new and potential clients, building professional relationships, and most importantly, developing our industry.”

Franklin Luminaire Committee Co-Chair Meghan Milkowski, Vice President of Business Operations-Print Group at Dow Jones, agrees. “Our Committee members are working diligently to make the program a spectacular gala which no one will want to miss. This is now the most prestigious awards program in what is arguably the most important visual communications market in the world,” says Milkowski.

The deadline for early bird sponsorships has been extended to August 31. Platinum sponsorships (table of 10) are available at the early bird rate of $5,500 ($6,500 after August 31); Gold sponsorships (half-table of five) are $2,750 by August 31 ($3,250 after). Sponsors receive recognition in the printed program and signage, and during the evening’s program. Individual tickets are also available at $400.