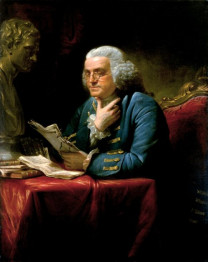 Benjamin Franklin, whose 311th birthday is today, was not only a founding father, scientist, fireman and inventor, he was a printer. Although most people probably envision him flying a kite, Franklin actually began his legacy at 17 years old in Philadelphia working as a printer. Samuel Keimer, a printer and poet, hired Franklin in 1723 to get his printing press in working order to print his composition Elegy on the Death of Aquila Rose, which would become known as the first piece of work printed by Benjamin Franklin.

Now, after disappearing for nearly 200 years, the only known copy of the elegy — which was printed as a broadside — will be on display at the University of Pennsylvania according to The New York Times. The broadside recirculated in the 1820s, 100 years after it was first produced, during a period of interest in America's founding generation.

Penn Libraries at the University of Pennsylvania acquired the piece, which was found in a scrapbook created by antiquarian Samuel Hazard in the 19th century.

The entire scrapbook, including the elegy, will be on display until Feb. 10, 2017.