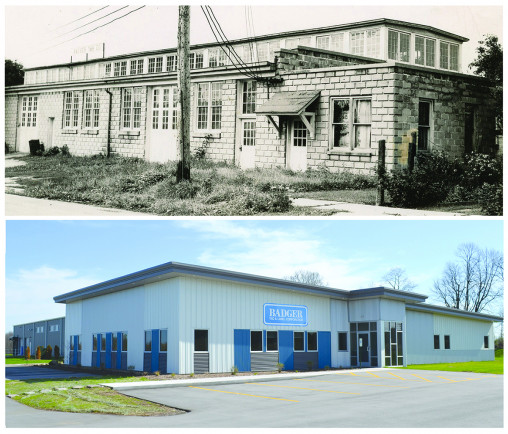 Badger Tag & Label's original location in downtown Random Lake, Wis., (top) is still in operation, albeit with major upgrades. Three years ago, a second production facility (bottom) was added about two miles away to round out the 52,000 sq. ft. of space.

According to the Bureau of Labor Statistics, only 25% of businesses make it to 15 years or more. With 2020 marking the 85th anniversary for Badger Tag & Label, no longevity stat is available for this volume of years, nor the quantity of select companies that can celebrate this milestone.

The company’s original location in downtown Random Lake, Wis., is still in operation, albeit with major upgrades. Three years ago, a second production facility was added about two miles away to round out the 52,000 sq. ft. of space. Currently 17 printing presses are in production between the two locations. This year it made the most recent addition to their presses, an eight-color digital press for producing specialty projects which represent an area of growth for the company.

One challenge of being in business 85 years, combined with their corporate name clearly identifying what they produce, is in order to remain viable and survive long-term, the capabilities of the company have had to diversify. While they would say that every item they produce is a tag or label, the specifications and names that customers use for some of these items represent a relatively new area of growth for the company: specialty products. These include magnets, dry erase, control panels/faceplates, window/wall/floor graphics, gauges and finishing services such as wiring, stringing, patches and eyelets.

Bob Thiel, current company president, is the third-generation of the family owned, privately-held business. His grandfather, Emil Thiel, incorporated the business on Sept. 4, 1935, shortly after the business challenges of the Great Depression.

Badger Tag & Label has weathered many business fluctuations over the 85 years, but has been able to prevail through the dedication of their employees. The average length of employment is almost 19 years, which is rare in today’s high turnover environment. About one-third of the 37 employees have been with the company over 25 years. In addition to two salespeople who cover Wisconsin, Badger Tag partners with over 3,000 independent dealers across the nation for their $7 million in annual sales.