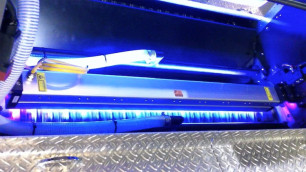 AMS Led UV in action on an offset press.

“We are pleased and humbled to receive such well-regarded recognition for our XP Series LED-UV curing modules, part of our X Series family of products,” said Steve Metcalf, president of AMS Spectral UV. “We developed the technology in hopes that it would revolutionize the way people print, and the proof is now in, it has.”

LED-UV curing offers an alternative to IR drying and UV curing solutions for solidifying inks and coatings as part of print production. Instead of using heat or UV light generated by mercury arc bulbs to solidify inks, this method employs LED chips to create UV light, which is used to cure (make dry) LED-UV-specific inks and coatings.

When compared with IR drying, LED-UV curing allows printers to use inks free 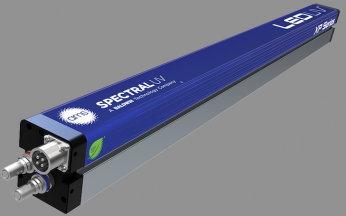 of volatile organic compounds, making it an environmentally safer solution – it also uses significantly less energy than IR systems, enabling cost savings at the overhead level. Spray powder is not needed, because sheets are instantly dry and immediately ready for post-production steps such as cutting, scoring and fabrication.

LED-UV curing also offers advantages over conventional UV curing — the first of which is that is does not produce ozone as a byproduct of creating UV light, so the distinct “UV cure” odor is not present with LED-UV cured print pieces, and ventilation systems are not needed to maintain air quality in pressrooms.

When inks are cured using XP Series LED-UV modules, they are instantly dry the moment the light hits them – so presses can run at their fastest speeds without fears of set-off or marking. The quality of cure is unmatched by other technologies, too, giving LED-UV cured pieces an advantage in “tape tests” and other methods used to test how cured or dry inks are.

LED-UV curing also allows printers to print rich ink densities (355%), so color and effects are more vivid and vibrant than is seen with pieces cured/dried using UV or IR solutions. 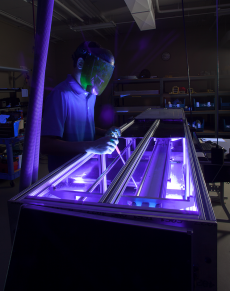 Since 1978, the InterTech Technology Awards have honored the development of technologies predicted to have a major impact on the graphic arts and related industries.

For more information about LED-UV curing systems from AMS Spectral UV – A Baldwin Technology Company, which include the XP, XD and XO Series, email sales@amsspectraluv.com.