DÜSSELDORF, Germany — June 6,2016 — Air Motion Systems has announced the release of its first ever UV LED "Look Book," at drupa 2016. The "Look Book" showcases the capabilities of sheetfed litho cured with UV LED. The cover features both high gloss spot coating and reticulation, which is known as "Drip Off" in Europe and "Strike Through" in North America. Also featured is the print quality and versatility of UV LED sheetfed litho on coated, uncoated clear plastic and white plastic substrates. 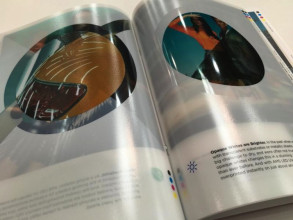 A close-up of the new AMS UV LED "Look Book."

The piece was produced at KonigsDruck in Germany. Olaf Konig, CEO, shares, "On our new KBA Rapida 106 LED press, print quality, brilliance and production speeds have reached new highs. And with innovative inks, coatings and synthetic papers, we have more to offer our customers than ever bfore. With AMS and LED the future is very bright".

The piece was designed by the prestigious firm, Rosendahl Berlin. Anja Rosendahl explains, "Timeliness plays such an important role in the fashion and retail area. With new LED-UV technology at Konigsdruck, we can now produce better quality work even faster. This gives us more time for creative development beforehand and total confidence in production." 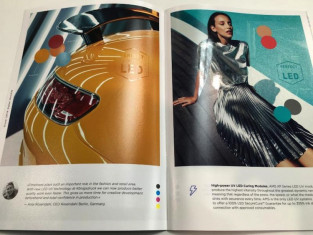 A close-up of the new AMS UV LED "Look Book."

Steve Metcalf, president of AMS, remarks, "We are pleased, but not surprised by the impact of the new 'Look Book.' Brilliant process print enhanced by the 'Drip Off/Strike Through' effects of the cover give it a tactile feel, with high gloss areas and matte effect areas. Visitors to our stand at drupa were amazed it was achieved in-line at full speeds on a six-color litho press."

Carsten Barlebo, AMS EMEA, relays, "UV LED has truly arrived and is the future of UV curing. The 'Look Book' is undisputable evidence of the quality and versatility of UV LED in the hands of a quality print house like KonigsDruck. The vibrant process print on a wide variety of substrates is a great showcase for UV LED."

drupa attendees are invited to stop by the AMS stand to receive their own copy of the new "Look Book." Others are invited to call AMS at +1 715-425-5600 for a personal copy.

AMS Stand at drupa 2016
AMS will showcase all of its products, as well as numerous examples of UV LED printed quality, substrate variations, special effects and customer successes at its 115 sq. m. (1200 sq. ft.) stand in Hall 14, Booth 71 at drupa between May 31 and June 10 in Duesseldorf, Germany. Additionally, AMS UV LED will be running live and on display at partners ranging from KBA, Flexotechnica, BOBST, Uteco, OMET, INX Digital, Argos and Flint Group among others. AMS also announced further UV LED activities and strategic partnerships at a drupa press conference — June 2 in Dusseldorf at the Deutsche Messe.

About Air Motion Systems
AMS LED solutions are No. 1 worldwide based on installed figures in the graphic arts industry of high power (12W and greater) UV LED systems spanning offset, flexo and digital applications at 250mm and greater curing widths. AMS world headquarters are located in River Falls, Wis., just outside of Minneapolis/St. Paul, Minn. in the USA.