SALT LAKE CITY  - August 30, 2017 - AlphaGraphics Inc. today announced Franchise Owners Barrie Keiser and Jim Lombardo of Fort Worth, Texas, have been recognized as having the Most Improved Franchise for 2017 at the AlphaGraphics annual conference for Franchisees, held in Orlando, Fla. The Most Improved Franchise Award looks at overall improvement during the prior year in areas including sales and other key operational metrics. Keiser and Lombardo achieved a sales growth of 2 ½ times their first year and have moved the Fort Worth Center into a solid, healthy position within the Network.

Both Keiser and Lombardo spent 20+ years working for large medical supply companies before coming AlphaGraphics Franchisees in 2006. According to Lombardo, “We are very proud of the team we have assembled to serve our accounts. We give them all the credit for driving the increase in sales we’ve experienced.”

AlphaGraphics’ President Aaron Grohs, also added, "This team of Franchisees is a dynamic part of our organization. Their contribution to the Network is invaluable and we look forward to seeing even greater success from them.” 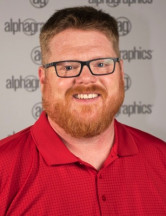 Mitch Usrey was one of several AlphaGraphics award recipients.

AlphaGraphics Inc. also announced that Mitch Usrey, a Franchise Owner in San Antonio, has received the Rising Star Award for 2017 at AlphaGraphics’ annual conference for Franchisees. This award recognizes a Franchisee who has been part of the network for at least nine months but not more than 24 months, has the highest month-over-month sales growth in the year prior, demonstrates high-quality operations, and is compliant with AlphaGrapics Inc. system and operational standards.

Though he spent several years as a NASA subcontractor engineer working on the Space Station, Usrey came from a printing background. His parents’ operated a printing franchise for several years before Usrey took it over. He ran the business as an independent for nine years prior to joining the AlphaGraphics Network in 2015.

Usrey and his wife Rachele have three children whom he credits as his inspiration every day. He also credits his team and his philosophy of keeping his on the future as the reasons behind his award. “I don’t consider that I have accomplished anything on my own,” Usrey said. “But one thing I focus on is forgetting what lies behind and looking forward to what lies ahead.”

Grohs stated, “The Rising Star Award is all about the future of our Network. With Franchisees like Mitch, we know our future is in good hands.”