You’ve got to diversify, or you’ll be on your way to going out of business. That’s the driving force at Adams Litho, based in Chattanooga, Tenn., according to its president, Wyatt Hogue.

Adams Litho got its start seven years ago as a purely offset-based commercial print shop. But it quickly started acquiring customers with application needs that extended beyond what their lithographic presses were capable of producing at the time. At first, says Hogue, they went the outsourcing route.

Wide-format was the first big area Adams Litho started to grow outside of its commercial offset roots, and Hogue notes, “we were sending all the work out — and losing control of it. So five or six years ago, we installed a flatbed printer and a cutter.”

The issue, he explains, wasn’t that his company didn’t have great trade printers to outsource jobs, it was more so that his shop was finding that the wide-format and offset work were going hand-in-hand, with projects requiring printed work from both sides at the same time. “If they’re late, then one piece isn’t complete,” Hogue notes. “We’ve had great vendors; there’s no question about that. But what happens if there’s an issue? We lose all this time going back and forth that we just can’t afford to lose.”

And that was the beginning of Adams Litho’s journey toward diversification. Today, the shop embodies the definition of “convergence,” with the ability to run everything from offset to digital, wide-format to specialty finishing, and it even offers online storefront and fulfillment services. In short, Adams Litho has transformed from a traditional commercial printer into a one-stop shop to meet the needs of its high-end clientele.

Hogue and his team weren’t content to stop with just diversifying their offerings in the traditional print space — it is now actively getting into the realm of packaging with a thriving folding carton printing business.

“About two years ago, I got an account that needed folding cartons,” Hogue recalls. “It was two jobs, and I was like, ‘Wow, I’ve never done those.’ I could print and cut the folding cartons, but I couldn’t convert them.” He told the client that he would need to outsource the folding and gluing portions of the process. While the customer indicated they preferred that it would all be done in-house, they still proceeded. “But then I picked up another customer,” he says.

That client was looking for a print shop that offered high-end, high-quality work that could also do folding cartons. At that point, Hogue realized that Adams Litho couldn’t grow that line of business without bringing more services in-house.

“I started looking two years ago [when we got the first customer], but I wouldn’t pull the trigger,” he says. “But it got to the point where we just had to do it. Due to the turnaround times we cater to, we just couldn’t continue to outsource and grow at the same time. So I bought a folder/gluer.”

Unlike some of today’s modern equipment, Hogue notes that folder/gluer machines still require a high degree of technical skill — “it’s still an art, still a craft” — so he invested in a Diana Easy 115 from Heidelberg USA to set his staff up for success. And that strategy paid off. “We installed that machine, and I bet we increased sales with just one customer by more than 50%, just from them finding out we now had a folder/gluer in-house,” he says. “There was a comfort level for them that we weren’t outsourcing that changed their mind.”

As the shop has gotten proficient with the new technology, Hogue notes that customers have started asking them to use the folder/gluer capabilities with other types of projects, which is growing that element of business to the point where he is starting to contemplate a second machine.

“We’re literally a one-stop shop now,” Hogue says. “It’s easy for customers to come here and get it done.”

Adding folding cartons has lifted all the other elements of Adams Litho as well, with Hogue noting that the business frequently ties in seamlessly with pieces printed on both the offset and wide-format equipment. “Say we have a POP kit,” he says, as one example, “and it has 10 different parts to it. In that kit, something will be printed offset, something is printed wide-format, and something is printed digitally. We integrate it all into one kit, with different substrates and quantities — and all color managed.” Not only that, but those pieces also have to match the packaging on the shelves for the product being advertised. Having it all produced in one location ensures a seamless look and feel.

“If you outsource any one component,” Hogue explains, “how do you know what someone else’s profiles are? What do they print on? Are they using the same ISO standard? You just don’t know. We do know.”

Another example of the Adams Litho strategy of integrating a diverse range of technologies to great success was for an event for a school, which Hogue notes was highly successful. “There were maybe 150 tables. We printed all of the auction booklets offset because it made more sense. The tabletops were all done on the wide-format printer, and the napkin rings were printed on our digital press. Everything matched — even the reds matched.

For Hogue, good business isn’t about having the fastest press, or the latest technology just for the sake of saying he has it. Rather, he has built the business around the ability to produce very high-end, color-critical, and high quality work. He notes that he was never interested in trying for work that requires shops to bid out and compete — while that can be a successful model for some, it isn’t the route he wanted to take.

From the time he first began to diversify with wide-format to today, the priority has been to find the equipment that offers the best possible results for the type of work his customers are demanding.

“Our main objective isn’t about speed as much as quality, and the integration between the technologies,” he notes. “For example, when we first bought a wide-format press, we took offset-printed pieces to compare and see what was acceptable. And when we installed it and showed our customers what we could produce, they said ‘This is incredible.’ One customer we had never done any wide-format work for before, [but] over the past five years we have continued to do more and more work for them.” And that growth is a direct result of the decision to bring the technologies in-house, and treat each one as high-end services of their own, rather than afterthoughts.

“People today want an ‘easy button,’” Hogue notes. “They want a one-stop shop that can do everything. For us, making it easy for the customer is a top priority, along with ensuring premium quality. I have never had a customer complain the quality was too good, never had them say they can’t accept it because it’s too high quality.” 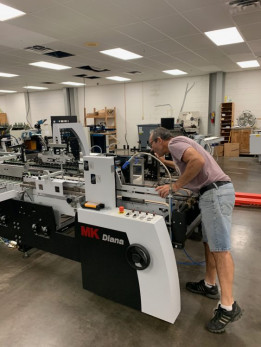 The Diana Easy folder/gluer purchased from Heidelberg will be able to grow with Adams Litho’s folding carton requirements — whether it needs field upgrades for rear folding, in-line ejection, central carriers, or higher speeds.

To ensure his quality levels continue to live up to customer expectations, Hogue has never stopped investing in the shop. While that can and does mean adding new lines and new services as demand evolves, it also means upgrading the equipment already on the floor to ensure it can keep up on all fronts.

“You upgrade a press to get a machine that is a little higher quality, and a little faster speeds,” he says, “but then the cutter can’t keep up, so you buy a cutter. I’m always looking to see where the bottleneck is, and wherever that is, that’s where we look to invest next. We’ve never turned a job down based on delivery or turn-time demands, and I never will. I will take as much business as I can get, and if I can’t do it, I’ll buy the equipment to do it and meet the customer’s expectations.”

While Hogue notes that he doesn’t necessarily know exactly what will be next — he lets customer demand dictate, to a point, the new services he adds to the shop — there is no denying that data management is another element that is becoming increasingly important for the future.

About four years ago, Adams Litho added online storefront services to the mix. Now it manages all of the inventory for some of its customers — “even things we don’t print,” he says.

“Their reps use our system to order their materials, and we do a lot of prints and keep it in storage for them, but we’re seeing a lot more customers who want their entire inventory managed — they can print out a report and see exactly who ordered what, and allow field reps to order without needing to go through HR. They give the authorization to go to us, and it’s all managed online, so no one at their company has to keep up with it. That’s been a big deal.”

In fact, the service has grown enough that Adams Litho added a person to the staff whose only job is to manage the storefront and inventory systems. “It’s been an important service for us,” says Hogue. “It integrates us with [the customers] further, and takes it off their plate.”

On the heels of inventory management is data management and fulfillment, with the ability to track a shipment, for example, and keep a customer informed of exactly where their goods are at any given moment, so clients can better plan for things like driver schedules. “That is an ancillary service, and has nothing to do with print,” Hogue says. And yet, it is another example of how embracing convergence and growing where the customer needs them to — regardless of whether it seems to be a complementary service at first or not — is a strategy for long-term success.

“We have one customer,” says Hogue, “that services all of the Home Depots in the United States. We manage so many products for them, with well over 100 users around the U.S. We set all of this up for them, at no charge — but guess who also does their printing? And how hard is it, now, if someone else wants to come in and try to do their printing? There is so much more to it. It gives us an advantage.”

For Hogue and his team, evolution, convergence, diversification — these are all just terms for one simple concept: growing with their customers.

“As they grow, so do you,” Hogue says. “If they stay the same, you won’t grow. So we depend on helping our customers grow in whatever direction they want. If someone walks in the door and says they want me to start stocking ‘Elf on a Shelf’ and sending it out with product kits, with barcode recognition to track it all, then I’m going to do it. If they ask us to print on a wooden fence, I’ll do it. If they want us to put tamper tags that set off alarms on boxes, I’ll do it. It sounds open-ended, but it’s true. If we’ve never done it before, we’ll figure out how to do it, no problem. I’m not going to let them look somewhere else." 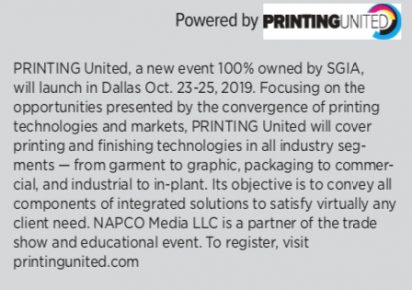