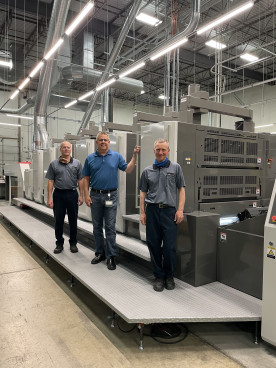 ABS Graphics, Itasca, Ill., opened its doors approximately 30 years ago and over time has evolved into a full-service operation that can handle a wide range of commercial print work, from design to offset and digital print to finishing, mailing and fulfillment. Recently, the company installed a new six-color Komori Lithrone G40 (GL640) with LED/UV to expand its already considerable capabilities and to add greater value to its bottom line.

The new press replaces a 16-year-old Komori GL640 offset press with H-UV. While the older press continued to run well and produce quality images, the decision to upgrade became a matter of economics from a maintenance standpoint. Comparing those operating costs to the benefits of investing in a new press, the new press won hands down.

“The purchase of a new press was really an economic decision. It just made sense from many different standpoints. It offered the technology, run speed and efficiency that we needed to continue on our growth path,” said Russ Babka, president and owner of ABS Graphics. “Komori’s been a really good partner. With the reliability and quality of the print we still get from our current Komori press, in addition to the partnership we’ve experienced with Komori, it wasn’t a hard decision. While we did our due diligence, there was nothing that gave us a second look outside of Komori.”

The new press is equipped with LED/UV, the latest in curing technology, that dries the sheets faster with less energy, thereby enhancing the speed of production. That is only one of the advantages. “It was the additional throughput of the new equipment, the faster plate changes. There’s less makeready, we get up to color faster and the technology is better,” Babka continued. “It was all the incremental improvements that, when you did the math, the numbers are there confirming your return on this investment. By the numbers is how we run our business.”

ABS Graphics occupies a 295,000-square-foot facility, employs about 100 people and is a long-time Komori customer. In addition to running Komori offset presses, the company installed a Komori Impremia IS29 digital inkjet press two years ago, also to improve efficiencies due to the Impremia’s sheet size and its ability to accept a range of substrates to support the company’s production of signage and direct mail.

The new GL640 was installed only months ago and Babka says that, while it’s too early to collect and assess all the numbers, the press has improved production speed, reduced paper usage and allowed for tighter job scheduling. He noted, “I think the story here is that Komori’s been there for us and has done a great job with their equipment, and it’s been really a good experience. When you have a great experience with a manufacturer, then you want to have that repeat experience.”