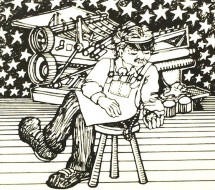 Apparition in the Night

I felt very much alone that first night, sitting behind the Linotype of a small-town Michigan weekly. I was supposed to have quit at ten, but stayed till midnight, finishing all the news from local correspondents. I wanted to make a good impression on my new job.

Through the window I could barely see the blackened lake, so dark was the night. Neither the moon nor the stars sent down a glimmer to dispel the somber mood of the waves that lapped against the shore in a melancholy monotone. I closed the window to keep out the chilly air that felt like the cold breathing of a ghost.

I had foreseen to lay off the bottle, as much as possible, but the mournfulness of the lifeless lake had disentombed memories of the past and, with a trembling hand, I reached for the fifth of brandy that I carried in my lunchbox.

It would do no harm now, no matter how much I drank, because I was down to the last paragraph and the boss would be happy in the morning when he saw that I had finished all the copy on my very first night.

He had seemed to be a tough boss, rather old and crabby, and very strict about details. He had warned me about polishing my shoes.

I felt better after the drink. But as I looked out at the lake I saw that the rising vapors were forming huge cylindrical hulks that slowly kept advancing toward me across the sinister water.

Quickly I put out all the lights in the shop, hoping to find safety in the darkness. For a long time, in petrified fascination, I kept watching the faintly illuminating giants.

I had heard about the invaders from outer space who made landings in Michigan, but I had theories of my own.

The invasion would not come by land. It would be by water. The flying saucers would splash into lakes and oceans, where they could remain undetected until there were thousands of them. And the invading creatures, breathing through artificial gills, could advance along the bottom of our waterways, surprising us from the shores while we were scanning the skies.

Perhaps they wouldn’t be visible to human eyes, being composed of some protoplasm that absorbed all light rays of the spectrum from infra red through ultra violet. The creatures probably spoke in high frequency sound waves beyond the range of the human ear.

They might be all around us, all the time, unseen, unheard, just waiting.

But as they rose from the relatively warm water, the chilly air of the night enshrouded each of them in a fog. They kept advancing toward the darkened shop, each platoon being reinforced by a new platform rising from the water.

I took my bottle and kept retreating until my back was against the wall. There I stood horrified while one of those high gray creatures came to the window, stopped to look in, then sank down towards the basement. And then another one came. And another.

I was afraid of the dark and afraid to put on the lights. And so I just stood there, taking a sip now and then to keep the shakes away.

Slowly I edged towards the door, determined to make a dash for it. But as my fingers touched the knob, I could feel it turning in my very hand. Jerking away from it, I could see, with eyes that were getting adjusted to the darkness, that the knob was turning again. But the door did not open. It was locked.

I sank to the floor helplessly, unable to even gasp for air. I might have passed out if it hadn’t been for the brandy.

Then I heard the creaking of the basement door, the ominous groaning of rusty hinges.

A wave of cold, deathly air swept up the stairway from the cellar. I closed my eyes, shivering. For a long time there was silence … then the muffled clinking of tin cans.

More drunk than brave, I yanked a double-barreled shotgun off the wall, ran to the stairway and, without even aiming, pulled both triggers. There were two clicks and nothing more. The gun wasn’t loaded. It slipped out of my hands, clattering down the stairs. As I glanced down, I saw one of those white spineless creatures slithering up from the floor. I threw my brandy bottle at it.

I got to the newspaper early the next morning to tell the publisher about his haunted print shop. Without speaking, he angrily handed me a check.

“I don’t know what the hell you were up to last night,” he said, stretching righteously to his full height, “but I can’t keep a boozer.”

The pressman was shaking his head. He was one of those handsome devils with black curly hair and long eyelashes. Without looking at me, he mumbled, “A boozer could do a lot of damage around here.” I tried to remember where I had heard that mumbling voice. And I couldn’t understand why such a nice fellow had turned against me.

We were standing at the top of the stairs, looking down into the basement.

“Beer cans all over the place,” the boss complained.

“And all that glass from a brandy bottle …”

The boss looked at the clock. “You’ve still got time to catch the morning bus for Chicago. I’m afraid you just won’t fit into a quiet town like this. We like it the way it is, nice and respectable. Nothing ever happens here, but that’s the way we like it.”

While the boss was speaking, his wife got up from the desk where she had been reading proof. She was quite a bit younger than he, but rather mousy, as if she didn’t have the courage to act as pretty as she really could be.

“I’m going to the post office,” she said quietly, “to pick up the mail.”

She reached into the closet for a white raincoat, which she draped over her arm. And she hurried out of the door, leaving behind her a barely perceptible trace of a strange perfume which I recognized as my favorite brandy.