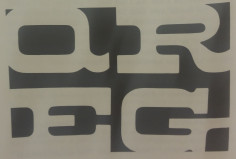 Here’s the next installment in our continuing series of republished “Otto’s Night Watch” columns written by Otto Boutin, which appeared monthly several decades ago in Printing Impressions. In this week's short story, Linotype machine operator Otto gets into a philosophical discussion with his boss about the value of gold and the role it's played in society. But its value pales in comparison to the invention of printing. “This type metal,” he said reverently, “is more useful than all the gold in the world. It doesn’t make trinkets. It makes civilizations.” Enjoy! It's Flashback Friday.

The Gold in Type Metal

I was having a pretty good time all by myself, running the Linotype while listening to Midnight Melodies coming over the radio, when Mr. Boss barged in. He was so mad he didn’t even say hello. He just picked up a mallet and began planing down a newspaper form. He was banging so hard that I realized he must have had another argument with his wife. He hasn’t the courage to fight her, so he runs to the shop to vent his anger of the delicate face of type.

Eventually he quieted down and began to fumble around in the type cases. Then we went to the Ludlow to set up a cover page for a musical program. Within an hour he was whistling quite contentedly.

Mr. Boss always rides out his emotional storms by working with his hands. As long as he has a print shop to run to, he’ll never need a psychiatrist.

But Mr. Boss is a shrewd guy. Something in his mind keeps telling him that he has to make a buck on everything he does. So he goes to the petty cash box and takes out a ten-dollar bill as compensation for his hour of work. He leaves a note in the box saying, “Tips to errand boy - $10.00.”

On this particular night he plugged in the coffee pot, filled two big porcelain cups and came to talk with me. On occasions like this, he’s got to talk to somebody.

“We’ve gone so far off the gold standard it isn’t even funny,” he began. “We don’t even use money any more. Everything is done with charge accounts and credit cards. My wife thinks her signature is as good as Fort Knox.”

I kept my mouth shut. I don’t want to get involved in family squabbles.

Mr. Boss sipped some coffee and put down the cup. “Our entire civilization is carried on with pieces of fluttering paper. Nobody sees gold any more.”

Frowning down at me, Mr. Boss shook his head.

“You’re old-fashioned,” he said. “Gold was alright in ancient times when people began using it as money. It was hard to make change in cows.”

“Cows were a popular form of money. In fact, our word capital comes from the Latin capita, meaning the heads of cattle.

“That wasn’t so good,” I said. “Bringing home a cow instead of a paycheck. I live on the third floor and my landlady is fussy.”

“Don’t worry. Those days are gone. Just like the days of gold are gone. We are now in the Great Paper Age, the era of confetti economics.”

“I prefer gold,” I insisted. “I’m sentimental about the stuff. The greatest love of my life was a widow with a big gold tooth. Down in Guatemala.”

“Gold is a bauble for barbarians,” said Mr. Boss. “It’s not very useful. It’s too soft for building bridges and too heavy for building ships. It’s only good for making rings to dangle in ears and noses. And for seducing women.”

“They’re always on a gold standard, aren’t they?”

“Always. With a nylon stocking a woman can dig more gold than any two men with a pickaxe. But what has gold really done for civilization?”

“It prevents inflation,” I muttered.

“Wrong. A sudden influx of gold would cause inflation, like it did in Spain in the 1500s. And in Alaska during the Gold Rush. A nation’s real wealth is determined by its production of goods, not by the amount of its gold. To a hungry man a beef steak is better than a nugget of gold.”

I shook my head. “I don’t agree with you, boss. Nobody gets that hungry anymore. As far as I’m concerned, I like gold. I like the way it shines, like the sun, like the source of all life. There’s something magical about it. The Babylonians, the Incas, the Chinese. Everybody. Everywhere. King Midas loved it and so did Montezuma.”

“Let’s get out of the swamps of history,” said Mr. Boss. “We’re living in a modern age. We know that gold is not too rare. The oceans are full of it, a hundred fifty ounces per cubic mile. And every day the mountain streams are washing more gold into the sea. The Rocky Mountain chain must be loaded with gold all the way from South America to Alaska. So far we’ve scratched a few pinholes at Cripple Creek, Sutter’s Mill and Klondike. But think of the areas we’ve missed. Some day we’ll learn how to find all the gold we want.”

"That would knock the hell out of the gold standard, wouldn’t it, boss?"

“You’re not kidding. The Rocky Mountain range actually extends into Siberia and keeps on going for thousands of miles. It’s only a matter of time before Russia finds enough gold to upset world economics.”

Having clinched his argument, Mr. Boss picked up a Margach bar of Linotype metal and hung it on my machine. Lovingly, he caressed the bar, which shimmered like silver. When he struck a match to light a cigarette, it reflected the golden flame.

“This type metal,” he said reverently, “is more useful than all the gold in the world. It doesn’t make trinkets. It makes civilizations.”

I couldn’t honestly shire his enthusiasm. I didn’t believe that I had given much of a push to civilization by setting 42 linear miles of Linotype slugs. All I did was to get the Flapper Age to the Beatle Age, from flat-chested girls to mop-haired boys, from ballroom dances to epileptic dances. And maybe television is an improvement on vaudeville, but I’d rather see Lili St. Cyr in person, without having her bathtub act interrupted by a commercial for dog food. But why should I argue with the boss? That bar of type metal fascinated me.

Mr. Boss scowled at me as if I were a nut.

“You’re back in the Middle Ages,” he said. “That’s the dream of medieval alchemists. But we know it can’t be done. You can’t change lead into gold.”

“What are you talking about?”

“I said if you knocked a few electrons out of an atom of lead, that bar of type metal could become 18-carat gold.”

Mr. Boss backed away from the machine and kept staring at the Margach bar. He kept shaking his head unbelievingly, as if it had turned to gold before his very eyes.