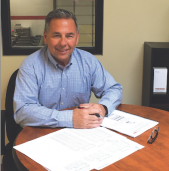 Crossmark Printing could serve as the poster child of a viable, 19-employee commercial printing operation that's grown methodically through select acquisitions based on opportunity and fit  — but now finds itself at a crossroads in terms of the need to expand its product offerings, develop online ordering capabilities, and invest to market itself better. Founded by Marty Ward in 1991, the Tinley Park, Ill.-based operation made its first big move in 2000 when it relocated into a larger space in an industrial park and acquired a five-color Komori press.

In 2004, Ward  — who first cut his teeth in the printing business in 1975 — acquired Olympic Printing from his former boss when they worked together at another establishment. Crossmark Printing still maintains the Olympic Printing facility in Chicago Heights, Ill., to serve clientele primarily located in the suburbs south of Chicago and in northwest Indiana.

And early last year, Ward did a tuck-in acquisition of Burbank, Ill.-based Print King, mainly to acquire its base of about 260 active accounts. Print King, which specialized in quick and general commercial work, was located at a busy intersection, but was losing walk-in customer business due to shifting buying habits. That physical location was closed, but the two former partners at Print King, Dan Bowen and Dennis Cramer, joined Crossmark.

Ward reveals that further acquisitions may be in the works, including discussions with a unionized print shop (in order to capture those "union bug"  print jobs specified for unionized providers) and with a family printing business that's being operated by the third-generation owner. But, at his juncture, nothing is definitive, Ward adds.

Housed in a 13,000-sq.-ft. facility, Crossmark Printing does a lot of work for nonprofits such as municipalities and school districts, but finds itself expanding into more general commercial work, such as brochures, and performing more mailing services. Offset work is run on a six-color, 28˝ Komori, and the shop's digital printing jobs are produced on a Xerox 1000 and Xerox 700 color presses, and on a Xerox 110 for monochrome work. Crossmark just acquired a Duplo slitter/cutter/creaser mainly for its business card finishing needs, which Ward says he's been very impressed with so far, and the bindery houses a 30˝ continuous-feed folder and a 20˝ pile-fed folder with gluing attachment, a Duplo 600i bookletmaker, a 45˝ Perfecta cutter with jogger and an automated shrink wrapper, among other gear.

Key initiatives for Crossmark during the remainder of this year are to expand into wide-format printing this fall. Ward has also made the investment to hire an IT web developer and a part-time marketing person. Recognizing the need to develop online ordering capabilities, Crossmark has purchased EFI Digital StoreFront to go with his EFI PrintSmith MIS platform. "Millennials want to be able to click an order, " he points out.

The recognition that Crossmark also needs to promote its capabilities and build more brand awareness is also a key initiative for 2017. A postcard direct mail campaign and promotional newsletter are both in the works.

"As a printers, we now have to market our companies, because we're not going to see the walk-in business like it had been for so many years."