2021 Rising Star: Joey Deters of Andresen Digital Loves the 'Inconsistency and the Diversity' of Print Jobs 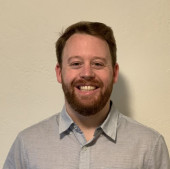 A chance meeting during a visit to a relative in San Francisco’s East Bay turned out to be a career-defining event for Joey Deters, then a freshly-minted graduate with a degree in communications and no definite idea of what he wanted to do with it.

One of his uncle’s neighbors was Michael Hicks, the general manager of Andresen Digital, a graphic imaging service provider with locations in the Bay Area and Los Angeles. Hicks liked what he saw in his friend’s nephew, and as Deters tells the story, offered him a shot at a job — with the understanding that it would take five years to learn the business and his proper place in it.

Accepting Hicks’ caveat, Deters joined Andresen Digital in 2011, 10 days after graduation. By 2015, he had progressed to the sales role he holds today. He describes his approach to account management as both analytical and creative.

Listening to the Customer First

“My job mainly is to interact with the client, figure out what their needs are, try to get an overall idea of what their project is, and drive them in the direction of what they need,” Deters says.

He also shepherds projects through production, preparing the estimates, taking part in press checks, and doing whatever else it takes “to get all the unknowns answered” for the customer. In this capacity, “I’m the point guy,” Deters notes. “I’m bridging the gap between production and the client.”

With 10 years of his career invested in printing, Deters says he continues to enjoy “the inconsistency and the diversity” of the products he sells and the projects he’s responsible for.

“We’re not just selling hang tags,” he notes. “We do everything from wide-format, to digital printing, to installations. It’s fun. There are a lot of different types of clients to work with. It’s a bit challenging to learn all those different capabilities. It definitely keeps me going.”

Deters clearly has come a long way from his first days on the job, when he possessed what he admits was “zero to little knowledge of printing.” Since then, experience, learning from mistakes, and support from colleagues at Andresen Digital have proven to be good teachers.

He’s proud of the book of business he’s developed during his five years in sales, establishing a career, “having some success, and finding some joy in that.” His present ambition is to do more of the same by bringing in new accounts, and hopefully larger ones, that will keep Andresen Digital thriving.

“The best way for me to fulfill my role as an account manager and salesperson is to keep growing in the role, and what comes with that is the growth of the company,” Deters says.

He’s found that most of the clients he calls on are people his own age, and that few of them have much understanding of the process behind the products they’re buying. He thinks this may suggest a way for the industry to engage some of the young talent it urgently needs to recruit.

“There are a whole lot of digital jobs where people are just staring at screens,” Deters observes. “At the end of the day, it’s nice to see a physical product that we make. And that may be a way to appeal to some younger people, because they’re not seeing a lot of that. I think that the whole physical process could be appealing to some.”

There’s no doubting the strength of the hold that the printing industry has on Joey Deters. “I’m only scratching the surface of where I need to be,” he says. “But I think that if I keep at it, and keep following the leadership of our GM (Michael Hicks), we’ll be able to bridge that gap and continue to progress.”

Proforma Reports a Record $60M Plus in Sales

END_OF_DOCUMENT_TOKEN_TO_BE_REPLACED
Happening Today
Print Outlook: What to Expect in the Year Ahead