The summary of Candid Litho/Candid Worldwide that follows recognizes this company as a “fast- track” firm that has weathered the recent storm in its own way, and its insight on business and industry trends can serve as a “north star” for companies looking to navigate themselves toward a safer harbor.

The scope of Candid Litho/Candid Worldwide is quite broad. CEO and co-owner Howard Weinstein says the company does “anything in the printing industry.” The company, which he owns with his brother Scott Weinstein, includes sheetfed offset, wide-format printing for interior and exterior applications, direct mail, custom packaging, and even installations. Founded as a litho shop in 1956 in New York’s SoHo neighborhood, the company has grown and expanded over the years, and now maintains locations in Farmingdale, New York, and Las Vegas. 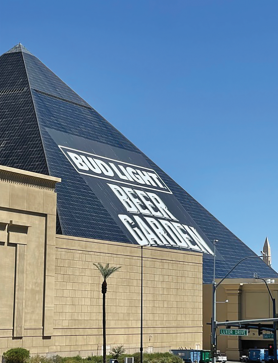 Wide, large, grand — call it what you will. This graphic from Candid Litho/Candid Worldwide is really big.

One of the tenets of the company, says Weinstein, is a commitment to keeping up with new technologies. In the past year, he says, this commitment has been more about adding finishing technologies. For instance, the company recently added a digital cutting system from Colex. Candid also recently added a D-Gen dye-sublimation printer, which will be used for the printing of silicone-edge graphics. SEG continues to be a hot market in the wide-format space.

Weinstein says the conditions that led to Candid’s strong performance in the past year were “that everybody got back to work.” He adds that the company does a lot of work for the entertainment sector, which has seen a resurgence of late. Asked to share lessons learned from the COVID-19 pandemic, Weinstein harkens back to 2001, when, after the attacks of Sept. 11, he found his company in “survival mode.” While he says it felt bad to have to cut back on staffing, a number of employees where later hired back.

For staffing, “We’re still down about 10% from where we were before,” he says. Regarding employee recruitment, Weinstein believes his company, and the broader industry, are having challenges because the printing industry isn’t the sexy segment it once was. “Trying to get the youth to understand,” he says, “is not easy.”

Moving Into the Future with the Next Generation

For Weinstein, looking forward for his company means looking one generation ahead. His son, Jordan Weinstein, vice president, business development, is positioned to move Candid into its future. A strong future, he says, also means getting more young people into the industry, which he adds, “will be a difficult task.” He includes that printing companies overall will have to become better at linking up with agencies — not just serving them, but either joining or becoming them.

For the printing industry in general, Weinstein sees a continued move toward digital technologies, noting that they are “full-force” across sectors. But even with that step forward, he believes analog printing technologies maintain a strong place in the industry. “There is still a strong need for sheetfed [offset] printing,” Weinstein says, noting his shop has two perfecting presses that run 10 to 14 hours per day. He adds the USPS should play a stronger role in bringing direct mail back to full utilization, pointing out that one of Candid’s customers recently redirected some of its marketing spend toward postcards — an effort that delivered favorable results.