If you hang around the printing industry long enough and have the good fortune to chat with old-school business owners from the Mickey Mantle era of America, chances are you’d hear tales that somewhat stretch the bounds of reality. Quite often, they strike you as wholly unbelievable and highly unlikely. They are known to start with the table-setting phrase, “And then I went to work and ..." followed by a you’re-pulling-my-leg statement like “we hired 25 unemployed guys who were just fishing off the pier, and wouldn’t you know, we got the job out the door by noon.”

The years pass and the lens of our memories becomes more than a little fuzzy, but the great aspect about stories such as this is that they emphasize the customer service credo. Plus, when a company has been in business for decades, you have to give them the benefit of the doubt on tall-sounding tales ... it may not quite have happened the way they remember it, but there were undoubtedly happy customers involved.

Laura Lawton-Forsyth is familiar with more realistic versions of this phenomenon. The president and owner of Lawton Printing in Spokane, Wash., recalls the tale about her grandfather answering the distress call of a customer who needed a cache of file folders. At the time, Lawton Printing did not produce file folders, but Lawton-Forsyth’s grandfather — an engineer at heart — reconfigured his printing press and diecut the manila folders. Problem solved!

“The evolution of what we do is quite interesting. A big part of our success has been the company’s ability to adapt to the needs of our customers,” notes Lawton-Forsyth. “It’s all about listening and solving problems.”

Her willingness to continue carrying that torch and branch out into territory that may be somewhat outside of Lawton Printing’s wheelhouse, as well as her zeal for seeking out technology that will enable her firm to maintain relevance with its clientele, has earned Lawton-Forsyth a berth with the 2016 Printing Impressions/RIT Printing Industry Hall of Fame induction class. 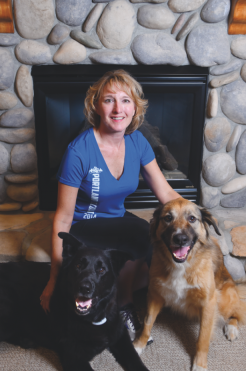 Whenever she needs to take a walk and clear her head, Laura Lawton-Forsyth has these two friends to keep her company.

Lawton-Forsyth, 48, has certainly continued the entrepreneurial spirit embraced by the company’s founders: her grandfather (Frank A. Lawton) and great-grandfather (Frank H. Lawton). Lawton Printing has a foursome of companies operating under its umbrella — Lawton Printing Services (its commercial printing division), naviTABS (which produces and sells adhesive tabs for books, reports, bibles, etc.), Lawton Publishing (the chamber of commerce division) and innovAGING (which produces directories for senior citizens in Washington state).

“While we started out as a basic commercial printer, we have grown a couple of different niches and continue to expand on that,” explains Lawton-Forsyth. “We have a division (Lawton Publishing) that works with chambers of commerce all across the country. When we started doing it, we were producing membership directories then maps, and evolved in the mid-’90s to providing websites for chambers. We’ve really grown that division outside of the printing realm.”

Lawton-Forsyth moved to Spokane at the age of one, and enjoyed what she considered a “basic childhood.” The city is a haven for those who enjoy outdoor activities, replete with lakes and mountains, and she enjoyed snow and water skiing during her formative years. While they didn’t travel all that frequently, Lawton-Forsyth clearly remembers long car rides to family reunions in South Dakota.

As a child, she also enjoyed riding the rope-controlled elevators at the family business. When she became old enough to work, Lawton-Forsyth would help rack the posters or banners as they came off of the screen printer. Among the more tedious jobs she endured was typing out addresses directly onto envelopes ... essentially making Lawton-Forsyth herself one of the original variable data printers.

“I’d have a bunch of phone books and we’d start typing out the addresses,” she recalls. “I wasn’t terribly good at it, but we got the job done.”

Once she entered into high school, Lawton-Forsyth took on the rebellious teenager persona and decided she wanted to give something else a try. Her father, Ray Lawton — who went to school with Cal Poly Graphic Communications legend Harvey Levenson — arranged for professor Levenson to come to Spokane and talk about what Cal Poly had to offer. Lawton-Forsyth was undeterred, and spent her first two years at a school in Denver, to study business, perhaps hotel management.

“My rebellion was: ‘I want out of here,’” she laughs. “But halfway through college, I transferred to Cal Poly and earned my print management degree.”

Lawton-Forsyth held a number of positions during her formative years at Lawton Printing, working customer service for File-EZ Folder, a scheduler for the commercial printing division, followed by an eight-year stint in the publications division. She became president of Lawton Printing/File-EZ Folder in October of 2001.

Click here to watch a video interview with Laura Lawton-Forsyth

Lawton-Forsyth points out that prior to her arrival, the company had garnered a solid reputation for embracing technology, being among the forerunners to add a phototypesetter, to embrace desktop publishing and to own a Heidelberg DI press. The company was also prescient on customer needs for fulfillment, kitting, promotional products, design and marketing ideas. And at press time, Lawton Printing Services was in the process of installing an HP Indigo 10000 digital press, which enables the printing of any size, cost effectively, in smaller quantities.

“Sounds cliché, but we try to be a one-stop shop for all of our clients’ marketing needs,” she says. “We just keep embracing what technology gives us and figure out how to use it in their best interests.”

Of all the challenges she’s faced in her tenure as president — she took the reins a month after 9/11 — the biggest adversity Lawton-Forsyth has endured is the recessional period from 2008-2012. The company lost half of its business and had to lay off a number of employees. Some valuable lessons learned enabled Lawton Printing to emerge from the downturn much more battle-tested. Lawton-Forsyth says the divisions are less siloed and the employees have since become more versatile.

“I learned a lot more about running the business during that difficult period. I find you learn more during the hard times than the good times,” she says. “There are hard choices that need to be made, and the sooner you do it, the better off your company is going to be.”

During this period, Lawton-Forsyth was able to benefit from a variety of industry veterans who had provided gems of wisdom from their years of experience, especially her family members (her uncle was also a longtime employee). The Printing Industries of America’s executive peer group has been an invaluable sounding board during the past 10 years, and Lawton-Forsyth is thankful that she can pick up the phone and reach out to a variety of printing sages if there’s an answer she needs.

“I’ve done a pretty good job of networking, learning from others and incorporating those ideas here at Lawton Printing,” she says. “We’re always looking for good ideas that can make our business better and stronger.”

Lawton-Forsyth has dedicated much time to industry involvement. She is a current board member, past president and longtime national board representative for the Pacific Printing Industries Association (PPIA). She served as a national board member for the Printing Industries of America (PIA), where she has served many positions, including board chair. She has chaired several committees and also served as chairman of the Young Print Professionals peer group.

Lawton-Forsyth has been a member of the Kodak Commercial Printing Advisory Group and an advisory board member for Cal Poly Graphic Communications.

Unparalleled Passion
“Laura is an exemplary leader whose passion for print is unparalleled,” notes Michael Makin, president of the PIA. “She has dedicated her entire professional career to serving the industry and, like her father before her, held the highest elected office within Printing Industries of America. On a personal level, she is an amazing mom, trusted friend and a lot of fun to be with.”

Another person who has worked closely with Lawton-Forsyth on the association front is Jules Van Sant, PPIA executive director. Van Sant admires Lawton-Forsyth’s selfless approach to improving the organizations that help the printing industry serve their members more effectively.

“Laura is one of the most tenacious business people I have met in the industry,” Van Sant says of Lawton-Forsyth. “She has a passion for printing and a desire to evolve her business, and that’s reflective of her commitment to Printing Industries of America and to PPIA. Laura is always looking forward to what’s on the horizon, to see how she can push the envelope. She challenges the status quo in an effort to improve for the future.”

Outside of the printing industry, one of Lawton-Forsyth’s favorite causes is the Rypien Foundation, founded by former Washington State University and NFL quarterback Mark Rypien. The foundation — which supports the families of children with cancer in the Spokane area — was created in honor of Rypien’s son, Andrew, who died of brain cancer at the age of three.

In what little spare time she has, Lawton-Forsyth enjoys walking, reading and traveling. She and her husband, Bob Forsyth, have been married 25 years. They have two children: Chandler, 21, and Alyssa, 19. The family also has two dogs, whom she enjoys walking most mornings.

“Morning walks are when I can clear my brain out,” she says. PI