In a year where immigration has taken center stage in the U.S. presidential election, perhaps it is only apt that the 2016 Printing Impressions/RIT Printing Industry Hall of Fame induction class includes the tale of a man whose success story is both highly unlikely and incredibly meteoric.

That 4over Founder and CEO Zarik Megerdichian has spent a comparatively-low 16 years in the printing industry ignores the immense prosperity enjoyed by his trade printing empire based out of Glendale, Calif. The company boasts 17 locations and more than 1,400 employees, with annual sales climbing toward the $200 million plateau. 4over acquired ASAP Printing earlier this summer.

Yet, when Megerdichian, now 50, arrived in this country at the age of 26, he touted only a high school diploma, one of the few mementos he still has from his childhood in southern Iran. When he was around 12 years old, the Iran-Iraq conflict forced Megerdichian’s family to flee to the capital of Tehran.

“It was an interesting experience. Constant learning, constant changes because of the revolution,” he recalls. “Day by day, everything was changing.”

Megerdichian ventured to Germany before applying for political asylum in the United States in 1992. His first two jobs in America: a driver for a messenger company and an “equipment boy” — his words — for an Iranian photographer in Beverly Hills, Calif. But Megerdichian had a strong sense of purpose and was determined to become a success in the United States. 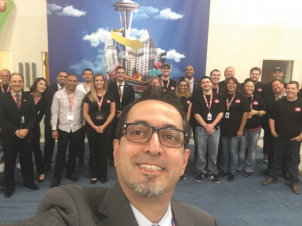 There's a family atmosphere that permeates 4over, and that cue comes from company founder and CEO Zarik Megerdichian.

Seeking the American Dream
“[Foreigners] sometimes hear mixed reviews about this country,” he says. “You hear about the American Dream, but you also hear about the problems facing America. I feel very fortunate for the opportunity to live and work in this country; it’s been a surreal and unreal experience. From my standpoint, the United States is the greatest country on Earth.”

Megerdichian’s American experience began to garner steam when the photographer inspired him to learn graphic design. He attended a school for graphics, where he learned Adobe Photoshop and Illustrator, all the while sensing that the internet — which was still in its nascency — was going to be a game-changer from both a creative and business point of view.

Several keys Megerdichian picked up along the way would later shape how he constituted 4over. A printer friend of the photographer was crippled financially when his large customers, which accounted for an alarming percentage of the overall business, began to migrate elsewhere. Meanwhile, the photographer friend/employer, who specialized in expensive, high-end photo shoots, was having difficulty getting paid; his accounts receivables were “all over the place,” according to Megerdichian. Thus, two mantras were born: one, 4over would cater to thousands of smaller accounts as opposed to the big fish; and two, Megerdichian would produce high-quality jobs as long as customers paid for them up front.

But perhaps the true catalyst of Megerdichian’s success was the time he got ripped off for $250. Megerdichian had worked in website design, creating cyfirm.com. One client came in and asked him to design and print a business card for her. A sample of it was sent to another business, owned by a man named “George,” who contacted Megerdichian and asked if he would be interested in doing 10 business card jobs at $25 a pop. The only catch would be that Megerdichian would need to redo any designs that did not meet George’s approval. After several reworks, the project was completed.

When it came time to collect, George stopped picking up the phone. Megerdichian was counting on that money, so the con job was particularly egregious. It did spur him to start 1-877-78cards.com as a business card designer. Megerdichian would provide the files to customers, who could then get the jobs printed on their own. He would soon learn the one-stop shop philosophy, realizing customers wanted their business cards designed, printed and boxed up for them by a single provider.

That led Megerdichian to use a local printer as an outsource provider. And when that source couldn’t keep up with the volume, the future of business success dawned on Megerdichian.

“If the guy had paid me and continued to give me work, I may not have ever gotten into the printing business,” Megerdichian points out. “Looking back, that guy did me a huge favor.”

The past 16 years have been chock-full of activity. One of the best pieces of advice he received during the early years was to focus his investments on equipment that can produce high-quality goods, as opposed to the marketing aspect. It was what Megerdichian needed to hear; his initial equipment line was long in the tooth, and it was not producing superior quality products.

Around 2003, 4over made pivotal investments in an Agfa Galileo computer-to-plate system as well as a six-color Komori Lithrone sheetfed offset press. That was the turning point, and business shot through the roof after that; so much so, in fact, that 2003 is the acknowledged birthday of the company. The ability to print at a 500-line screen has provided 4over with a mark of distinction among its 40,000 customers.

Megerdichian has never been afraid to embrace change, and he realizes the vision he has now might not encompass all of the opportunities that will come into sight. “The day I started, I was focused on a smaller [geographical] area; it was as far as I could see,” he says. “Today, 4over is doing business internationally in Canada and looking across borders for other opportunities. I now view life and the printing world differently. I used to show up dressed in a Hawaiian shirt and jeans, and now I wear a shirt and tie. It’s just a constantly evolving process.

“In the early days, we only did business cards and 4x6˝ postcards. We were B2C with no trade work. Then I discovered how much better it was to deal with printers; their files are perfect and they understand printing limitations. Within a year after (being B2C) we were completely B2B and never looked back. And now we offer packaging, roll labels, flags ... so many products. And our customers are loving it.”

A hands-off boss who staunchly opposes micro-managing, Megerdichian likes to surround himself with executives who are “smarter than me” and put them in a position to succeed. And he doesn’t dwell on past mistakes.

Credo: Full Steam Ahead
“I follow the credo that you never want to look back,” he says. “What’s behind me is behind me. If I make the wrong decision, I learn from it and move forward. My goal is to turn 4over into a billion-dollar operation.”

Megerdichian also ensures that his company is a good corporate citizen and friend of the communities in which it does business. He established the Believe Project at 4over, which enables employees to donate their time — on the company’s dime — to charitable causes. The company also donates printing to various organizations.

Megerdichian’s impact in such a short time frame has resonated with industry veterans. Joe Stramel, district sales manager for Komori America, considers Megerdichian a “true visionary” in the printing industry.

“In my 30 years of printing press sales I have not met an individual with a higher level of integrity to his word, his market and his employees than Zarik Megerdichian. His determination to [embrace] efficient print solutions has made him a change maker in the printing industry.”

Echoing Stramel’s sentiments is Elie Basal, production color program manager at Xerox. “Zarik continuously looks for new ideas and innovations to keep growing his successful business,” Bassal remarks. “He has always been very responsive to me, direct to the point and always with utmost respect. Zarik treats his people, associates and vendors with reverence and kindness.

“He makes his points very clear and lays out his requirements in such a way that it helps me do my job easier and be more effective, which in turn creates a much healthier business relationship that benefits both parties.”

An avid reader and soccer player in his heyday, Megerdichian might also be the most well-known printer who has appeared on television, as he has competed in the World Series of Poker for the past six years. In 2015, when Megerdichian had the second-most chips on the event’s opening day, he eventually fell about an hour shy of finishing with the cash-in players.

“ESPN pulled me into a room filled with bright lights, and it got to me,” he admits. “I made a few mistakes and then tried to recover too fast. But I still look forward to competing every year.”

Tina and Zarik Megerdichian have two children, son Andrew, 13, and daughter Lanna, 11. They also live with a Labradoodle named Bobo. The Megerdichains enjoy traveling; Barcelona is one of his favorite destinations. PI