Will Trump Sign Postal Reform Legislation If It Reaches His Desk? 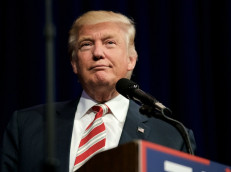 The House of Representatives took up postal reform legislation this week, a decade after Congress passed the Postal Accountability and Enhancement Act, which was supposed to shore up the U.S. Postal Service for the 21st century. It didn't work out that way. Shortly after President George W. Bush signed the law, the economy tanked, as did mail volume.

Certainly, there was plenty of talk at this week’s committee hearing about how bad things are for the USPS. “Ladies and gentlemen, it’s the third quarter and you’re down by 25 points, and if Tom Brady doesn’t come in, you’re bankrupt,” intoned Rep. Darrell Issa (R-Calif).

But the actual legislation being marked up is incrementalist and status-quo preserving. To cut costs, the bill would push more retired postal workers onto Medicare’s rolls, and deliver more mail to the curb, rather than to folks’ front doors.

House Oversight and Government Reform Committee Chairman Jason Chaffetz (R-Utah) who has been doggedly pursuing postal reform for two years, plainly hopes to get this legislation to Trump’s desk. It will not be easy. Last year’s version — which is identical to the current bill—did not even get a vote in the House or the Senate.

Trump has not said anything about postal reform. It is, however, difficult to see any compelling reasons for him to sign the Chaffetz bill into law.

Sponsored Content Is Print Retargeting for You?
END_OF_DOCUMENT_TOKEN_TO_BE_REPLACED
The Printing Impressions 400